The Challenge of Being Baptist: Owning a Scandalous Past and an Uncertain Future (Paperback) 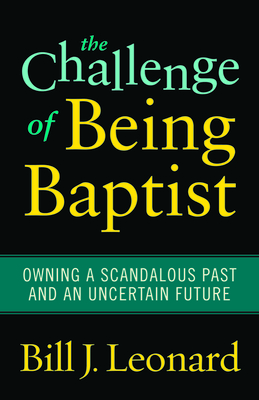 The Challenge of Being Baptist: Owning a Scandalous Past and an Uncertain Future (Paperback)

The largest Protestant denomination in the United States is in the midst of a serious identity crisis; many Baptists are revisiting or turning away from the tradition, leaving others to become increasingly uncertain that the denomination can remain viable. Here, however, noted Baptist historian Bill Leonard wades through the murky waters of the Baptist past and explores the historic commitments of this unique people--all in an effort to shed light on its contemporary dilemmas and evaluate the prospects for a Baptist future. While encouraging members of the faith to thoroughly and fairly evaluate their heritage--and its many blunders along the way--Leonard ultimately argues that the Baptists' contentious audacious witness shown throughout its history still has a worthy role to play in the twenty-first century.

Bill J. Leonard is Dean of the School of Divinity and Professor of Divinity, Emeritus at Wake Forest University. A prolific writer, Leonard is the author of Baptist Questions, Baptist Answers: Exploring Christian Faith (2008), Baptists in America (2007), and Baptist Ways: A History (2003). He lives in Winston-Salem, North Carolina.