Order of the Night Jay (Book One): The Forest Beckons (Paperback) 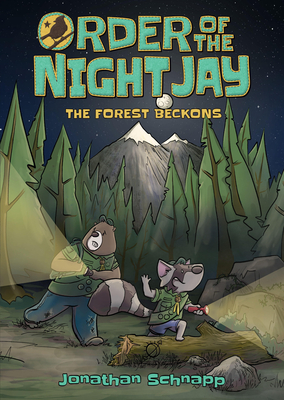 Order of the Night Jay (Book One): The Forest Beckons (Paperback)


Usually Ships in 1-5 Days
Making friends can be hard for a nervous bear, even at summer camp. But Frank’s about to discover a mystery… and the camp needs him to save the day!

Frank is perhaps the most un-bear-like bear Camp Jay Bird has ever seen. Actually, he's probably the ONLY bear Camp Jay Bird has ever seen. And there are tons of bugs, he's getting picked on, and he can't seem to earn a single badge! But there's Ricky, an excitable little raccoon who shares Frank's love of Mega Bunny comics. But Ricky's friendship might be more than Frank can handle. After breaking camp rules, getting lost in the woods, and discovering ancient secrets about the long-forgotten Order of the Night Jay, how will Frank explain all this to his dad?

Jonathan Schnapp lives in Rochester, NY, with his amazing wife and two obnoxious cats. He spends most of his time painting, drawing, writing, and running around the neighborhood. He also has worked with several STEM companies, doing STEM things. He received his MFA in Imaging Arts from the Rochester Institute of Technology in 2008. While not his first comic, Order of the Night Jay is his first published graphic novel.

"A fun camp adventure for those who adore talking and clothes-wearing animals!" —School Library Journal

“…a detective-duo heist, a moving and cautionary tale of friendship and openness prevailing against prejudice, or a chilling campfire yarn… The first in a thrilling series, this one forgoes the cliffhanger entirely and plunges straight over the edge, leaving readers hungry for more.” —Kirkus Reviews