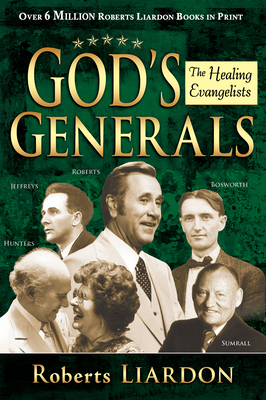 
Usually Ships in 1-5 Days
In his fourth God's Generals volume, Roberts Liardon chronicles God's great healing evangelists of the twentieth century. Journey with such paragons of faith as: As you read about the lives of these ministry pioneers, your faith for signs and miracles will grow as you anticipate seeing God's mighty hand move in the church today.

Born in Tulsa, Oklahoma, Roberts Liardon is a leading Protestant church historian. He founded Roberts Liardon Ministries, along with Embassy Christian Center, Embassy Ministerial Association, Spirit Life Bible College, and Operation 500. He also founded the Reformers and Revivalists Historical Museum. At seventeen, Liardon published his first book, I Saw Heaven, which sold over 1.5 million copies and catapulted him into the public eye. To date, Liardon's books, including the God's Generals series, have sold over 15 million copies worldwide and have been translated into more than 60 languages. Liardon's DVD series God's Generals became one of the bestselling Christian DVD series in history. Having ministered in over 125 countries to members of the public and to world leaders, Liardon is also recognized internationally. In addition to being an author and a church historian, he is a public speaker, a spiritual leader, and a humanitarian. Liardon continues to manage and expand his international headquarters in Sarasota, Florida, and his office in London, England.