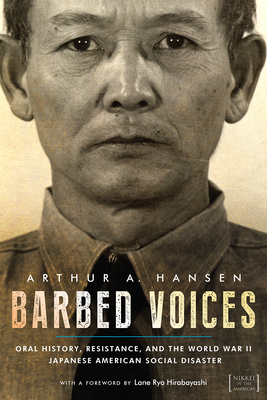 By Arthur A. Hansen, Lane Ryo Hirabayashi (Foreword by)

Out of Print - unavailable
Barbed Voices is an engaging anthology of the most significant published articles written by the well-known and highly respected historian of Japanese American history Arthur Hansen, updated and annotated for contemporary context. Featuring selected inmates and camp groups who spearheaded resistance movements in the ten War Relocation Authority–administered compounds in the United States during World War II, Hansen’s writing provides a basis for understanding why, when, where, and how some of the 120,000 incarcerated Japanese Americans opposed the threats to themselves, their families, their reference groups, and their racial-ethnic community.

What historically was benignly termed the “Japanese American Evacuation” was in fact a social disaster, which, unlike a natural disaster, is man-made. Examining the emotional implications of targeted systemic incarceration, Hansen highlights the psychological traumas that transformed Japanese American identity and culture for generations after the war. While many accounts of Japanese American incarceration rely heavily on government documents and analytic texts, Hansen’s focus on first-person Nikkei testimonies gathered through powerful oral history interviews gives expression to the resistance to this social disaster.

Analyzing the evolving historical memory of the effects of wartime incarceration, Barbed Voices presents a new scholarly framework of enduring value. It will be of interest to students and scholars of oral history, US history, public history, and ethnic studies as well as the general public interested in the WWII experience and civil rights.
Arthur A. Hansen is emeritus professor of history, founding director of the Japanese American Project of the Oral History Program and the Center for Oral and Public History, and founding faculty member of the Asian American Studies Program at California State University, Fullerton. He has been honored as both the Outstanding Teacher and the Outstanding Faculty Member in the College of Humanities and Social Sciences at CSUF. He was Senior Historian at the Japanese American National Museum and received the Distinguished Lifetime Achievement Award from the Association for Asian American Studies in 2007 and the Sue Kunitomi Embrey Legacy Award from the Manzanar Committee in 2014. He is also editor of Nisei Naysayer: The Memoir of Militant Japanese American Journalist Jimmie Omura.

“A unique compilation of original scholarship. . . . Hansen offers a wealth of observations and issues he encountered and met through his decades of interviewing.”
—Tetsuden Kashima, University of Washington, and author of Judgment without Trial: Japanese American Imprisonment during World War II


"A 'go-to' book for those interested in the Japanese American Internment."
—The Oral History Review

"Barbed Voices gets at the depth of the social trauma, the small and large acts of resistance, and the political maneuvering by Issei and Nisei leaders. . . Acts of resistance and the voices behind barbed wire are no longer silenced."
—Western Historical Quarterly

"Barbed Voices is an impressive achievement that demonstrates how Hansen has shaped out understanding of the Japanese American experience, particularly through his gathering and analysis of oral stories.'
—Southern California Quarterly