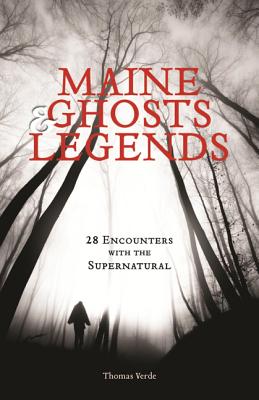 
Usually Ships in 1-5 Days
Maine has a rich supernatural history and ghost stories from the state are as varied as they are prolific. Freelance writer and reporter Tom Verde first became interested in such eerie occurrences while researching first-hand encounters with ghosts for a series of public radio programs. This book recounts some of the spine-tingling tales he uncovered in his research, including: -The dagger-wielding shade who terrorized a Portland couple -The murdered Indian who revisited Means's Tavern -Famed diva Lillian Nordica, whose voice still echoes through the Farmington auditorium named in her honor -The hostile spirit who tried to frighten the tenants out of an Orrington house -Even an entire phantom ship, bound eternally for Freeport These are not fictitious creations of literary imagination. People from all walks of life--including many who were positive they would never believe in ghosts--attest to these encounters.
In the line of duty, award-winning journalist Tom Verde has attended a witch's Sabbath in Salem, Massachusetts, crawled into a hibernating bear's den in northern Maine, chased moonshiners across the backwoods of Virginia, been chased himself by Cape water buffalo in the South African sveld, tried to bribe his way into the forbidden chapel of the Ark of the Covenant in northern Ethiopia and trekked, solo, across the desert of Maine. He has journeyed throughout Europe, the Middle East, Africa and the U.S. on assignment for public radio's former weekly travel show, The Savvy Traveler, as well as the New York Times, The Boston Globe, Copley News service, Marketplace and NPR's environmental show, Living on Earth. His work has also appeared in a host of national magazines, including Newsweek, Travel & Leisure, Reader's Digest, National Geographic Adventure, and Art News.