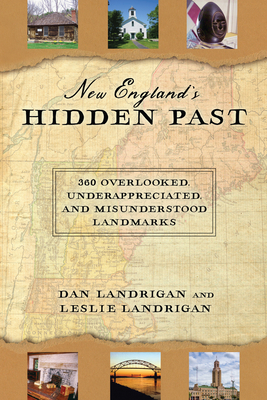 
Usually Ships in 1-5 Days
New England is so compact that even casual visitors can sample its diverse history in just a short time. But travelers and residents alike can also pass right by historic buildings, landscapes, and iconic objects without noticing them. New England's Hidden Past presents the region's history in an engaging new way: through 58 lists of historic places and things usually hidden in plain sight in all six New England states. Pay attention and you'll find stone structures built by Indians, soaring churches financed by Franco-American millworkers, and public high schools started by colonists when New England was still a howling wilderness. You may have seen them, but you probably don't know the story behind them. New England's Hidden Past takes readers to the grave sites of revolutionary heroines, Loyalist house museums, as well as, Revolutionary taverns and colonial inns. It takes them to Indian trails, the oldest houses, historic department stores, ghost towns, and Little Italys. Each unique, interesting location or object has a counterpart in the other five New England states. A perfect guide to keep in the car and refer to when traveling New England or planning a trip.
Dan and Leslie Landrigan are the authors of Bar Harbor Babylon: Murder, Misfortune, and Scandal on Mount Desert Island. They are also the writers behind the New England Historical Society. Since its inception in 2014, the blog--which explores and promotes New England history--has hosted more than three million visitors. More than 20,000 have signed up to receive the NEHS weekly updates. With backgrounds in journalism and publishing, they now live in Stonington, ME.