The Theory of Money and Credit (Paperback) 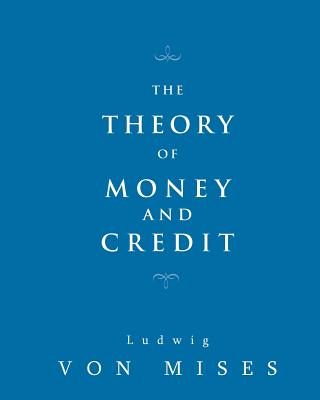 The Theory of Money and Credit (Paperback)


Usually Ships in 1-5 Days
Original 1912 Edition. (English Translation first published 1934.) Economist and philosopher, Ludwig von Mises present his "Theory of Money and Credit" by first looking at the nature and value of money, why there is a demand for money, and how it is used as currency. He goes on to explain the purchasing power of money and how it determines economic and monetary policy, often in a way that results in financial melt-downs. Ludwig Heinrich Edler von Mises (September 29, 1881 - October 10, 1973) was an Austrian-American economist, historian, philosopher, author, and classical liberal who had a significant influence on the modern free-market libertarian movement and the Austrian School. The Theory of Money and Credit is an economics book written by Ludwig von Mises, originally published in German as Theorie des Geldes und der Umlaufsmittel in 1912. Along with Carl Menger's Principles of Economics, and Eugen von B hm-Bawerk's Capital and Interest, this work was a major contribution to economic theory. Its first English translation was published in 1934, and Part Four was added by Mises to the English language edition in 1953. In this work, Mises looks at the nature and value of money, and its effect on determining monetary policy. Included is his regression theorem, that tries to explain why money is demanded in its own right, as moneys at first glance do not serve a consumable need. Mises explained that moneys only can come about after there has been a demand for the money commodity in a barter economy. The German word Umlaufsmittel literally translates as "means of circulation" and was translated into the text of the English version as "fiduciary media". However, the publisher thought the unusual terminology would irritate readers and substituted "money and credit" in the title, thereby losing the specific distinction Mises had made in selecting his original term.