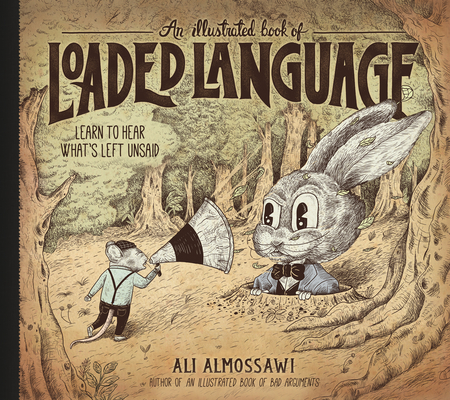 
Usually Ships in 1-5 Days
“This is a book for every thinking person, the perfect antidote to today’s culture wars.”—Hope Jahren

The creators of An Illustrated Book of Bad Arguments return with this desperately timely guide to how words can trick us. Learn to “hear” hidden bias, slant, and spin—from an irresistible cast of woodland creatures!

Public discourse? More like public discord. The battle cries of our culture wars are rife with “loaded language”—be it bias, slant, or spin. But listen closely, or you’ll miss what Ali Almossawi finds more frightening still: words that erase accountability, history, even identity through what they leave unsaid.

Speaking as wise old Mr. Rabbit, Almossawi leads us through a dark forest of rhetoric—aided by Orwell, Baldwin, and a squee-worthy cast of wide-eyed woodland creatures. Here, passive voice can pardon wrongdoers, statistics may be a smokescreen, gaslighting entraps the downtrodden, and irrelevant adjectives cement stereotypes. Emperor Squirrel isn’t naked; he has a clothes-free sartorial style. Mouse’s roof becomes flattened (Elephant’s foot just happens to be there at the time). And when keen-eyed Owl claims a foreign shore, he seems to be overlooking someone . . .

Alejandro Giraldo holds a degree in graphic design from UPB Medellín and a master’s in art direction from ELISAVA (the Barcelona School of Design and Engineering). He runs the clothing company Velmost and works as a freelance illustrator. He lives in Medellín, Colombia.
“This is a book for every thinking person, the perfect antidote to today’s culture wars.  It doesn’t contain rules about what you can or can’t say—instead, it gives you tools to think more deeply about what your words convey, so that you may more precisely express yourself.”—Hope Jahren, author of Lab Girl and The Story of More

“An Illustrated Book of Loaded Language uses beautiful pen-and-ink drawings by Alejandro Giraldo and a metaphorical conflict between badgers and rabbits to lay out some of the ways language is shaped by those in power. . . . [The badger-rabbit war] isn’t going to end in our lifetime, but you can still recognize and call out bad-faith rhetoric when you see it.”—Lifehacker

“There are a wealth of examples that exposed this reader to an Alice in Wonderland–like experience of bewilderment and amazement at the myriad ways news reports, advertisers, politicians, and anyone else can exploit language and befuddle the reader. . . . This book should be required reading for all students.”—Manhattan Book Review

“You business people, scientists, teachers, and leaders need to read this. It’d be glib to say that An Illustrated Book of Loaded Language is for the thinkers in the room, but then that would be loaded language. Instead, let’s just say that this is a book that could challenge some folks in how they present arguments, enforce others when they present things and make others peek past the veil of supposed objectivity.”—Daddy Mojo

Praise for An Illustrated Book of Bad Arguments

“This short book makes you smarter than 99% of the population. . . . The concepts within it will increase your company’s ‘organizational intelligence.’ . . . It’s more than just a must-read, it’s a ‘have-to-read-or-you’re-fired’ book.”—Geoffrey James, INC.com

“I love this illustrated book of bad arguments. A flawless compendium of flaws.”—Alice Roberts, PhD, anatomist, writer, and presenter of The Incredible Human Journey

“A whimsical, straightforward primer . . . a guide to how to strengthen—and how not to weaken—your arguments.”—Shelf Awareness, starred review