The Revised Fundamentals of Caregiving: A Novel (Paperback) 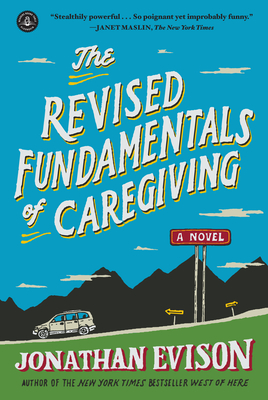 The Revised Fundamentals of Caregiving: A Novel (Paperback)

“What a heartfelt journey we travel in this capriciously tragic story of Benjamin Benjamin Jr., caregiver extraordinaire. His charge, Trev, is a 19-year-old suffering from Duchenne muscular dystrophy, or, as Ben describes him, 'a pretzel with a perfectly healthy imagination.' Ben is suffering too. He is trying to recover from a personal tragedy that has left him without a family or a job. To read this book is to be in a constant, conflicting state between tears and laughter.”
— Lynn Riggs, Books & Company, Oconomowoc, WI

In The Revised Fundamentals of Caregiving (releasing June 24, 2016 as a Netflix Original Film titled The Fundamentals of Caring, starring Paul Rudd and Selena Gomez), Jonathan Evison, author of the new novel This Is Your Life, Harriet Chance! and the New York Times bestseller West of Here, has crafted a novel of the heart, a story of unlikely heroes in a grand American landscape.

For Ben Benjamin, all has been lost--his wife, his family, his home, his livelihood. Hoping to find a new direction, he enrolls in a night class called The Fundamentals of Caregiving, where he will learn to take care of people with disabilities. He is instructed about professionalism, about how to keep an emotional distance between client and provider, and about the art of inserting catheters while avoiding liability. But when Ben is assigned his first client--a tyrannical nineteen-year-old boy named Trevor, who is in the advanced stages of Duchenne muscular dystrophy--he soon discovers that the endless service checklists have done nothing to prepare him for the reality of caring for a fiercely stubborn, sexually frustrated teenager who has an ax to grind with the whole world.

Over time, the relationship between Ben and Trev, which had begun with mutual misgivings, evolves into a close friendship, and the traditional boundaries between patient and caregiver begin to blur. The bond between them strengthens as they embark on a road trip to visit Trev’s ailing father--a journey rerouted by a series of bizarre roadside attractions that propel them into an impulsive adventure disrupted by one birth, two arrests, a freakish dust storm, and a six-hundred-mile cat-and-mouse pursuit by a mysterious brown Buick Skylark. By the end of that journey, Trev has had his first taste of love, and Ben has found a new reason to love life.

Bursting with energy and filled with moments of absolute beauty, this big-hearted and inspired novel ponders life’s terrible surprises as well as what it takes to truly care for another human being.

Jonathan Evison is the author of the novels All About Lulu, West of Here, The Revised Fundamentals of Caregiving, This Is Your Life, Harriet Chance!, Lawn Boy, and Legends of the North Cascades. He lives with his wife and family in Washington State.
New York Times Editor’s Choice
Washington Post Notable Works of Fiction for 2012
Kansas City Star Top 100 Books of 2012
Seattle Times’ 25 Best Books of 2012
Editors’ Pick for Amazon’s Best of 2012 list
The Millions “A Year in Reading” list for 2012

"Engaging . . . The journey is reckless and wild, infused with the sad rage that makes good comedy great . . . As this carload of misfits moves east, relationships are broken and forged, and Ben recreates a kind of family. This could be horribly clichéd and yet it isn't, because Evison never bows to what we expect from happy endings." —Jennifer Gilmore, The New York Times Book Review

“Evison’s third and most stealthily powerful novel . . . [is] a book so poignant yet improbably funny . . . [An] adventurous story.”—Janet Maslin, The New York Times

"A journey back to life . . . bittersweet . . . It's moving and funny, and, my God, how refreshing it is to read a story about someone caring for a disabled person that isn't gauzed in sentimentality or bitterness." —Ron Charles, The Washington Post

“Evison’s prose is replete with his gifts for witty imagery and turns of phrase . . . With its extremely cinematic plot and collection of quirky scenes, the novel might remind you of Little Miss Sunshine meets Rain Man . . . The Revised Fundamentals of Caregiving is even-keeled, big-hearted, and very funny, and full of hope. Through Ben, missteps are made, and human foibles are exposed. But we also glimpse that distant shore of hard-earned redemption. For that, Evison’s novel is worth the voyage.”—The Boston Globe

“An entertaining picaresque and a moving story of redemption.”—The New Yorker

“Allow me to add my voice to the chorus of praise that has greeted The Revised Fundamentals of Caregiving…Grimly hilarious.”—The Wall Street Journal

“It's a story of heartbreak and healing . . . This is a novel with a terrific sense of the relationship between comedy and tragedy." —The Daily Beast

"Evison has given us a salty-sweet story about absorbing those hits and taking a risk to reach beyond them. What a great ride." —The Seattle Times

"Evison has an easy fluidity with the dashed dreams and disappointments of characters who don't ask for pity." —Seattle Weekly

"The comic novel may be the hardest work of fiction to pull off well . . . The Revised Fundamentals of Caregiving is a showcase of what makes a good one tick: Characters just a touch disconnected from reality, a prevailing sense of life's absurdity and a handful of rude jokes . . . Evison proves that some of the best comedy emerges from lives that have jumped the rails.”—Minneapolis Star Tribune

“A warm, funny look at recovering from tragedy.”—Milwaukee Journal Sentinel

“A cathartic novel that will leave readers breathing a heavy sigh of pleasurable release. Its offensive at times, witty, funny, and an excellent example of modern realism . . . Evison offers readers bittersweet highs and tragic lows while illuminating all the sticky, messy passages in between. No matter what you’re in the mood for, pick up this little gem. In less than 300 pages, the weight of the world will feel a little lighter on your shoulders in the aftershock of Ben’s tragedy. Your prospects may seem brighter next to Trev’s grim future. Your eyes will sting from laughter at the dark, unforgiving humor. You won’t have any regrets.”—The Missourian

“Evison's brand of feel-good storytelling comes from life's trenches, where hope and humor must endure in the face of despair.”—Fort Worth Star-Telegram

“Evison has developed the command of craft and tightness of focus necessary to animate quirky characters and outlandish set pieces.”—Philadelphia City Paper

“I think you're going to be hearing a lot about Jonathan Evison's new novel. Reviews will mention the construction of the book (alternating time periods, brilliantly handled), the secondary characters (all vivid), the road trip (crazy and transforming), and the perfect blend of humor and sadness. One of Evison's gifts is creating characters that are easy to care about . . . It’s a thought-provoking story about two men trying to do their best in a world that doesn't play fair.”—Beth Fish Reads

“Smart and bittersweet and attuned to the absurdity of life -- Evison's book is the literary version of a good grunge song.”—LA Weekly  (“Book of the Week” selection)

"Let's not mince words. The Revised Fundamentals of Caregiving is far and away the best novel Jonathan Evison has ever written . . . It's funny, moving, and lively, the sort of novel that will appeal to avid readers and to people who only manage to read one or two books in a year. The secret, the trick to the book, is in the voice of the narrator, which feels so true that it simply can't be denied." —The Stranger

“Evison manages to find considerable humor in this plaintive story of care giving and receiving . . . A lively narrative with a poignant core and quirky, lonely characters.”—Kirkus Review