How Evan Broke His Head and Other Secrets (Paperback) 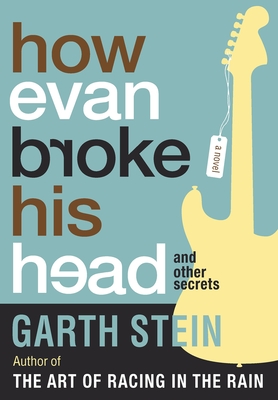 How Evan Broke His Head and Other Secrets (Paperback)

Featuring a conversation between Garth and his editor, Bryan Devendorf, drummer of The National.

Fathers never forget seeing their kids for the first time. But Evan is greeting his son, Dean, fourteen years late. The boy had been shuttled secretly to another city, along with his teenaged mother, while still a newborn. Now his mother has passed away, and Evan is it—Dad. An instant single parent.

Evan was once lead guitarist for a hot band with a hit single; now 31, he gets by as a guitar instructor to middle-aged guys, and does menial work in a music shop. With Dean in the picture he has to change fast, which means facing up to the past, to his own father, and to the epilepsy that haunts him and threatens his every moment.
Garth Stein is the author of two other novels, the worldwide bestseller The Art of Racing in the Rain, now published in 30 languages, and Raven Stole the Moon, as well as a play, Brother Jones. He lives in Seattle with his wife, three sons, and their dog, Comet.
Praise for How Evan Broke His Head

A BookSense pick *  Winner of a Pacific Northwest Bookseller Award

“A funny, bewitching, observant book about families, fathers and sons, and growing up, no matter how old you are.”
—The Oregonian

“A beautifully un-shiny novel of passion, forgiveness and the life force that is fatherhood.”
—PNBA Awards Committee

“Captivating, moving, and always observant ... a wonderful, beautiful book; I will never forget it!”
—Ben Sherwood, author of The Death and Life of Charlie St. Cloud

“Hits all the frets of a powerful story: sharp-witted dialogue, vivid characters, insight into medical challenges and prose that snaps like well-placed plucks of guitar strings. . . . I hold up my lighter and turn it full-flame for Stein’s latest work. Encore!”
—The Seattle Times