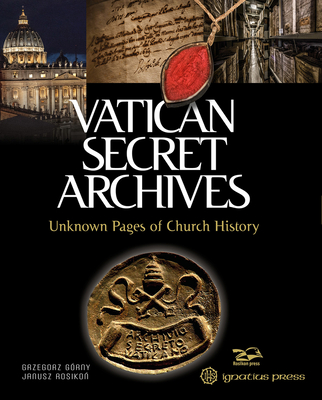 
Email or call for price
This latest book by the internationally acclaimed investigative journalism team is their most intriguing work to date. Best-selling books by Górny and Rosikon have been translated into eight languages, including five richly illustrated investigative works published by Ignatius Press.

For this new work they had access to one of the most guarded institutions in the world - the Vatican Secret Archives.The authors tell of its turbulent history and its unique documents, familiarizing us with the real stories behind the most controversial events in the Church's history including: the Knights Templar trial, the Crusades, the Inquisition, the Galileo Galilei trial, Pius XII's attitude towards the Holocaust, and much more.

In addition to preliminary archival research, they travelled to several countries, visiting places described in the documents, and met with numerous historians and experts. This brilliantly written book, illustrated with stunning photographs, is the result of several years' work. It is highly recommended reading for all those interested in historical riddles concerning events of major importance.

Based on extensive factual material, the book debunks numerous unjust stereotypes, black legends and distortions that have accumulated over the centuries about Catholicism.
Grzegorz Górny is a reporter, essayist, and film and tele- vision producer. He is the founder and editor-in-chief of the quarterly Fronda. He has produced various documentary television series and authored numerous articles for European publications. Janusz Rosikon is an acclaimed photographer and a member of the Association of Polish Artistic Photographers. His photographs have been featured in Time, Newsweek, and Reader's Digest.