My Mom Had an Abortion (Paperback) 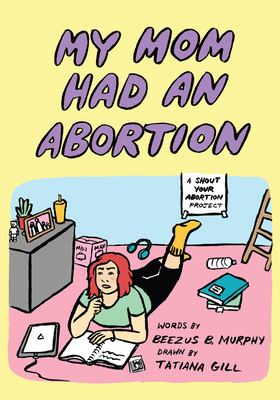 My Mom Had an Abortion (Paperback)

My Mom Had an Abortion is a unique coming-of-age tale told by a self-described dyslexic-asexual-lesbian-feminist teenager and illustrated by body-positive comic artist Tatiana Gill. We follow our protagonist Beezus B. Murphy as she chronicles her evolving understanding of menstruation, reproduction, and abortion and finds her place in a confusing world. Initially influenced by harmful narratives in pop media such as the "the pregnant teenager" cliche, we watch Beezus's ideas change as her body changes and as she learns more about the intricacies of her family history and her mom's own reproductive experiences. She grows from a confused, out-of-place kid into a self-assured, empathetic, and strong-willed activist teen. As Beezus says, "People shouldn't be shamed for getting or not getting abortions. Young people absorb the information that we gather from our surroundings. Sometimes it's good information and other times it can be harmful. But now I realize abortion is perfectly normal and should be kept safe and legal." Sprinkled with pop culture references, hilariously apt descriptions of unwanted body changes and menstruation like the chapter "Blood, Bath, and Beyond," and instantly understandable revelations of growing-up, this beautifully illustrated short graphic novel crucially fills a cultural gap around complexities of abortion, pop culture, body changes, and finding out where we fit in.