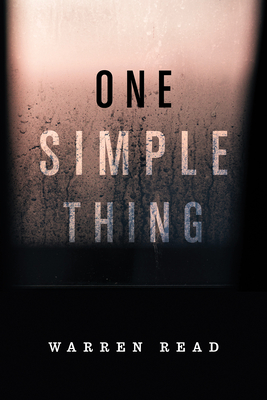 "One Simple Thingis fit to burst with grit, atmosphere, pathos and suspense. With his expertly paced second novel, Mr. Read invites comparisons to the crime masters of the mid-twentieth century--guys like Chandler, and Thompson, and Willeford."―﻿Jonathan Evison

"In Warren Read's stories, setting is a character, stealthy, lush, and full of hidden depths. The very air has texture, holding the characters tight as their small town worlds unfold. A twisting, twisted tale full of well-developed characters and dense setting, One Simple Thing is a story that will hold you in its grip until the satisfying end."﻿ ―Jessica Barksdale Incl n, author of The Burning Hour and When We Almost Drowned﻿

"One Simple Thing is anything but simple. This tense, layered story brings us into the world of hardscrabble folks who are fighting and often failing to get by. Opening on a boy's heart-wrenching journey through the implosion of his family, One Simple Thing flowers into a captivating crime mystery. While tempting to compare Warren Read to classic crime writers, he also vividly chronicles lives lived on the margins, like writers such as Larry Brown or Willy Vlautin.

Warren Read is the author of a 2008 memoir, The Lyncher in Me, about his discovery that his great-grandfather had incited a lynching in 1920, and the 2017 novel, Ash Falls, which was called "a moody, haunting foray into rural Americana in the mold of Daniel Woodrell and Christian Kiefer," by Kirkus. His fiction has been published in Hot Metal Bridge, Mud Season Review, Sliver of Stone, Inklette, Switchback and The Drowning Gull. In addition, he has had two short plays directed and produced by Tony winner Dinah Manoff. Warren earned his MFA from the Rainier Writing Workshop at Pacific Lutheran University.