The Big Myth: How American Business Taught Us to Loathe Government and Love the Free Market (Hardcover) 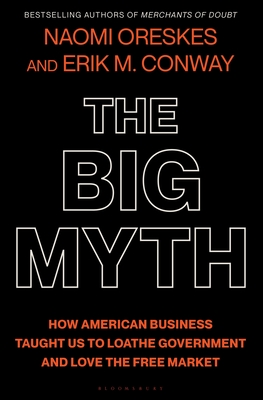 The Big Myth: How American Business Taught Us to Loathe Government and Love the Free Market (Hardcover)

The bestselling authors of Merchants of Doubt offer a profound, startling history of one of America's most tenacious--and destructive--false ideas: the myth of the "free market."

In their bestselling book Merchants of Doubt, Naomi Oreskes and Erik M. Conway revealed the origins of climate change denial. Now, they unfold the truth about another disastrous dogma: the “magic of the marketplace.”

In the early 20th century, business elites, trade associations, wealthy powerbrokers, and media allies set out to build a new American orthodoxy: down with “big government” and up with unfettered markets. With startling archival evidence, Oreskes and Conway document campaigns to rewrite textbooks, combat unions, and defend child labor. They detail the ploys that turned hardline economists Friedrich von Hayek and Milton Friedman into household names; recount the libertarian roots of the Little House on the Prairie books; and tune into the General Electric-sponsored TV show that beamed free-market doctrine to millions and launched Ronald Reagan's political career.

By the 1970s, this propaganda was succeeding. Free market ideology would define the next half-century across Republican and Democratic administrations, giving us a housing crisis, the opioid scourge, climate destruction, and a baleful response to the Covid-19 pandemic. Only by understanding this history can we imagine a future where markets will serve, not stifle, democracy.

Naomi Oreskes is Professor of the History of Science at Harvard University. Her opinion pieces have appeared in the New York Times, the Washington Post, the Los Angeles Times, and many other outlets. Her TED talk, “Why We Should Trust Scientists,” was viewed more than a million times. Erik M. Conway is a historian of science and technology and works for the California Institute of Technology. He is the author of seven books and dozens of articles and essays.

“A persuasive examination of how corporate advocates, libertarian academics, and right-wing culture warriors have collaborated to try to convince the American people that economic and political freedom are indivisible, and that regulation leads inexorably to tyranny ... Polemical yet scrupulously researched, this wake-up call rings loud and clear.” —Publishers Weekly

“A thoughtful denunciation of the economic dogma that the market knows best … A timely, well-argued contribution to the literature of economic inequality and regulation.” —Kirkus Reviews

“At last, an antidote to the toxic fiction that now imperils our planet and our democracy. For decades, self-interested businessmen have promoted the canard that any government effort to make markets work more safely and fairly will cost us our freedom. Not true, show Oreskes and Conway as they boldly exhume the buried truth: that what's really at stake is the form of capitalism we choose. If you read only one book this year, make it The Big Myth.” —Nancy MacLean, author of Democracy in Chains: The Deep History of the Radical Right's Stealth Plan for America

“Both a carefully researched work of intellectual history, and an urgently needed political analysis explaining how Americans have become so deeply alienated from their own government. In a compelling narrative, the authors show how a small but zealous cadre of conservative businessmen, many of them selling harmful products, waged and largely won an undeclared ideological war for Americans' hearts and minds. The magical thinking they promoted has profited them handsomely, but cost the rest of the country tragically.” —Jane Mayer, author of Dark Money

“Admirers of the authors' Merchants of Doubt will find the same trenchant investigative brilliance here, deployed on an even wider canvas. They show how wealthy industrialists praising free enterprise shamelessly put vast sums of money into manipulating the free market of ideas. The target: well over a century's worth of progressive movements from child labor regulation to the New Deal to the fight for renewable energy.” —Adam Hochschild, author of AMERICAN MIDNIGHT

“A detailed, carefully researched study of how the ideology of market fundamentalism was sold to the American public. An invaluable exposé of how a certain kind of magical thinking was turned into accepted wisdom.” —Amitav Ghosh, author of THE GREAT DERANGEMENT

“In this major work, Oreskes and Conway expose how American democracy was deformed by decades of 'free market' ideology. They reveal how big business interests attacked the very guardrails that make markets safe and fair and flogged the self-serving notion that popular democracy is dangerous to 'freedom.' Worst of all, American business successfully persuaded many of us that we should trust corporations more than our own government.” —Sen. Sheldon Whitehouse (D-RI), co-author of THE SCHEME

“A sweeping, eye-opening account of how the myth of the free market seeped into American political culture. Looking back at the history of the organizations and individuals who attempted to erase the reality of our mixed public-private system, The Big Myth busts the myth of market fundamentalism that has weakened our ability to tackle major policy challenges.” —Julian Zelizer, CNN contributor, and author of BURNING DOWN THE HOUSE

“A wonderful book. It is St. George slaying the dragon. The Big Myth can free American minds from a dangerous enthrallment.” —James Gustave Speth, former dean, Yale School of the Environment, and author of AMERICA THE POSSIBLE

“Market fundamentalism has been profoundly damaging to human and economic welfare, in terms of ill health, environmental harms, inequality, and more. How did this belief system become so prominent in ideas and politics, particularly in the USA? This fascinating and important book tells that extraordinary story with care and rigor, setting out the cast of characters, their motivations, and the modus operandi. Please read this book. And be warned.” —Lord Nicholas Stern, former Chief Economist of the World Bank

“This urgent and compelling book should be required readings in board rooms, business schools, and beyond to challenge pervasive bad assumptions and ignorance about the role of government and the importance of governance.” —Anat Admati, George G.C. Parker Professor of Finance and Economics, Stanford University, and author of The Bankers' New Clothes