Perilous Bounty: The Looming Collapse of American Farming and How We Can Prevent It (Paperback) 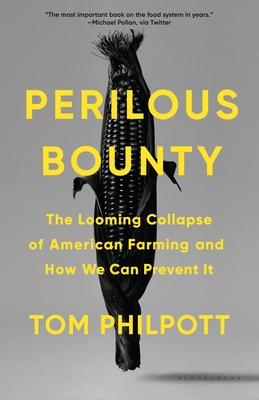 Perilous Bounty: The Looming Collapse of American Farming and How We Can Prevent It (Paperback)

An unsettling journey into the disaster-bound American food system, and an exploration of possible solutions, from leading food politics commentator and former farmer Tom Philpott.

More than a decade after Michael Pollan's game-changing The Omnivore's Dilemma transformed the conversation about what we eat, a combination of global diet trends and corporate interests have put American agriculture into a state of "quiet emergency," from dangerous drought in California--which grows more than 50 percent of the fruits and vegetables we eat--to catastrophic topsoil loss in the "breadbasket" heartland of the United States. Whether or not we take heed, these urgent crises of industrial agriculture will define our future.

In Perilous Bounty, veteran journalist and former farmer Tom Philpott explores and exposes the small handful of seed and pesticide corporations, investment funds, and magnates who benefit from the trends that imperil us, with on-the-ground dispatches featuring the scientists documenting the damage and the farmers and activists who are valiantly and inventively pushing back.

Resource scarcity looms on the horizon, but rather than pointing us toward an inevitable doomsday, Philpott shows how the entire wayward ship of American agriculture could be routed away from its path to disaster. He profiles the farmers and communities in the nation's two key growing regions developing resilient, soil-building, water-smart farming practices, and readying for the climate shocks that are already upon us; and he explains how we can help move these methods from the margins to the mainstream.

Tom Philpott has been the food and agriculture correspondent for Mother Jones since 2011. Previously, he covered food as a writer and editor for the environmental-news website Grist. Philpott's work on food politics has appeared in the New York Times, Newsweek, and the Guardian, among other places. From 2004 to 2012, he farmed at Maverick Farms in Valle Crucis, NC. He lives in North Carolina and Austin, Texas.

“[Philpott] wants to focus our attention squarely on the environmental consequences of the global and, especially, the American way of raising food. Nothing, his new Perilous Bounty reminds us, is going in the right direction. . . We can't lose sight of the land, water and air that need the loudest and longest advocacy. Perilous Bounty will line up many new recruits.” —New York Times Book Review

“The most important book on the food system in years.” —Michael Pollan, via Twitter