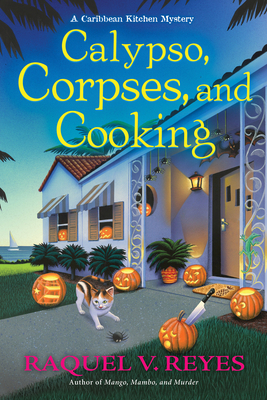 This is book number 2 in the A Caribbean Kitchen Mystery series.

Fall festivities are underway in Coral Shores, Miami. Cuban-American cooking show star Miriam Quiñones-Smith wakes up to find a corpse in her front yard. The body by the fake tombstone is the woman that was kicked out of the school's Fall Festival the day before.

Miriam's luck does not improve. Her passive-aggressive mother-in-law puts her in charge of the Women's Club annual gala. But this year, it's not canapes and waltzes. Miriam and her girlfriends-squad opt for fun and flavor. They want to spice it up with Caribbean food trucks and a calypso band. While making plans at the country club, they hear a volatile argument between the new head chef and the club's manager. Not long after, the chef swan dives to his death at the bottom of the grand staircase.

Was it an accident? Or was it Beverly, the sous chef, who is furious after being passed over for the job? Or maybe it was his ex-girlfriend, Anastasia?

Add two possible poisonings to the mix and Miriam is worried the food truck fun is going to be a major crash. As the clock ticks down and the body count goes up, Miriam's life is put in jeopardy. Will she connect the dots or die in the deep freeze? Foodies and mystery lovers alike will savor the denouement as the truth is laid bare in this simmering stew of rage, retribution, and murder.
Raquel V. Reyes writes Latina protagonists. Her Cuban-American heritage, Miami, and Spanglish feature prominently in her work. Mango, Mambo, and Murder, the first in the Caribbean Kitchen Mystery series, won a LEFTY for Best Humorous Mystery. It was nominated for an Agatha Award and optioned for film. Raquel’s short stories appear in various anthologies, including The Best American Mystery and Suspense 2022. Find her across social media platforms as @LatinaSleuths and on her website LatinaSleuths.com
Praise for Calypso, Corpses, and Cooking:
“Enjoyable . . . Fans of Mia P. Manansala’s Arsenic and Adobo will want to check this out.”
—Publishers Weekly

“Calypso, Corpses, and Cooking holds community, family, and the joy of food at the heart of it; keeping it immensely joyful, while being an incredibly fun read.”
—Latinx in Publishing

“A 'must read' for mystery buffs with an affinity for cozy mysteries and amateur women sleuths . . . Original and fun.”
—Midwest Book Review

“Calypso, Corpses, and Cooking will have readers turning the pages as quickly as possible.”
—Cozy Mystery Reviews

“Raquel V. Reyes’s series debut, Mango, Mambo, and Murder, furthers my belief that the cozy mystery has become one of the most diverse, and most vibrant, in contemporary crime fiction.”
—The New York Times

"Mango, Mambo, and Murder has everything you look for in a cozy mystery but also feels like a breath of fresh air."
—BookPage, starred review

"Mystery fans will instantly be pulled into this one."
—Reader's Digest

“[A] refreshing debut and series launch . . . [with] well-defined characters and [a] vibrant social scene. Mouthwatering recipes round out the volume.”
—Publishers Weekly

“It is refreshing to see the diversity of this story.”
—New York Journal of Books

“This series is now on my insta-buy list."
—Mia P. Manansala, author of Arsenic and Adobo

“Raquel Reyes’ debut is as bright as the Miami sun and as satisfying as a big pot of sancocho, with a kick like a shot of Cuban coffee."
—Catriona McPherson,  multi-award-winning author of the Last Ditch Motel series

“A delicious culinary cozy that serves up both mouthwatering Caribbean food and a fun, family-centered mystery."
—Gigi Pandian, award-winning author of the Accidental Alchemist Mysteries