A Song Of Victory: A Historical Christian Romance (Paperback) 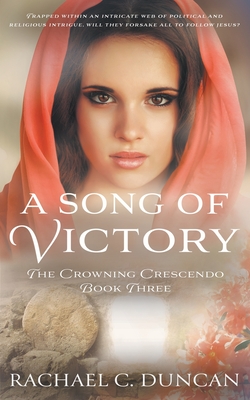 A Song Of Victory: A Historical Christian Romance (Paperback)

With the stakes higher than ever, what choices will be made by Julia, Barabbas, Melina, and Malchus as the city is rocked to its very core.

Jerusalem is again plagued by turmoil as the controversial ministry of Jesus Christ reaches a crowning crescendo. Even after the preaching of John the Baptist is tragically cut short, the teachings of Jesus shake the entire province, forcing many to take sides.

Some even against their own family.

Julia leans on God as her reckless husband, Barabbas, becomes more entrenched with the violent Zealots and their dangerous cause. After making a surprising discover, she must trust her Savior unlike ever before.

Meanwhile, caught in the palace of a twisted ruler, Melina's faith is tested by the schemes of a wicked woman. Witnessing appalling events that will forever change the course of history, she also wrestles with her feelings for Malchus - the handsome young man so hesitant to pledge his allegiance to the Messiah.

Trapped within an intricate web of political and religious intrigue, Julia, Barabbas, Melina, and Malchus must face the same fateful, possibly fatal, question: Will they forsake all to follow Jesus Christ?