Spell Heaven: and Other Stories (Paperback) 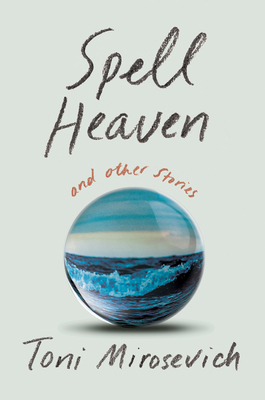 Spell Heaven: and Other Stories (Paperback)

In Spell Heaven, a linked story collection, a lesbian couple moves to a coast town and unexpectedly finds a sense of belonging with a group of outsiders.

Stories include the tale of an undocumented boy's drowning when a wave pulls him out to sea, an ex–FBI agent’s surveillance of a man who leaves chocolate bars at a tree in a weekly ritual, a mother on meth who teaches a lesson on mercy, and Kite Man, who flies kites from a fishing pole and sells drugs on the side. His motto: When the kites fly, you can buy.

The narrator of these stories, raised in a working-class Croatian American fishing family and immigrant community, chooses an early career in labor-oriented jobs. Years later, she finds herself in an academic position in a white-collar world “where the clothes are clean but the politics are dirty.” She questions her own stereotypes about her neighbors and gradually begins to question her life path. Spell Heaven celebrates those who are looking for a human connection in an increasingly isolated world.
TONI MIROSEVICH was raised in a Croatian American fishing family in Everett, Washington. She is the author of a book of nonfiction stories, Pink Harvest, winner of the First Series Award for Creative Nonfiction, and five books of poetry. A professor of creative writing at San Francisco State University for many years, she currently resides with her wife in Pacifica, California.
A NYLON Best New Book of the Month

"In the opening story of Spell Heaven, a fishwife asks the narrator, 'Do you know the difference between a fairy tale and a sea story?' . . . This artful collection of 23 linked stories, a sort of 'Cannery Row' of Northern California, is both. The hardscrabble characters tell their sea stories, but the sea that surrounds the inhabitants of the small town of Seaview is like a capricious character in a fairy tale. It tosses boats, drowns with rogue waves, yet sometimes washes up treasures." —Thaisa Frank, San Francisco Chronicle

"Mirosevich indulges in the smell, the stink, and the happy-making of these character interactions . . . [She] knows how to look and how to be generous with her observations. She's not profiling these characters to exploit them and their quirks for our amusement, though she knows we will be amused. They are not a sideshow for the narrator. She shares their stories because they have taught her something about herself, to presume nothing . . . After reading Spell Heaven, I'm left with this impression: who we become has more to do with how we accept our lives than how we plan them. We are always changing, always in some kind of flux . . . With this collection, Mirosevich has done it. In truth, she is a sea captain, standing at the helm, scanning the horizon line, that seam between what we see and what we know." —Miah Jeffra Milla, Bay Area Reporter

"Living through a global pandemic provides its own kind of 'fish story,' but it’s the real thing that occupies Mirosevich, herself (like her narrator) the daughter of a fisherman and a cannery worker, bound inextricably to the sea, body and soul. Not ineffably, though—Mirosevich’s personal language and cadence is of the sea and is a known language to everyone who has descended from seafaring or sea-sifting people . . . The sentences are tossed by uneven swells and surges, of waves crashing and hulls listing catastrophically. Even in quieter moments, landlocked moments, the lines move at times at a twelve-knot clip over rolling swells, at other times at anchor, letting light ripples nudge the lines in trochaic pulses." —Jennifer Carr, Boom California

"I would like to wrap myself inside of Toni Mirosevich's words, so that their warmth, vitality, and haunting insights into our humanity will somehow absorb into my thoughts and skin, and I will become a better person. The characters in these unforgettable stories are clever, at times peculiar, but always full of heart. Their experiences stay with you long after you close this book. This is a beautiful collection." —Aimee Phan, author of We Should Never Meet and The Reeducation of Cherry Truong

"To read Spell Heaven is to be swept away to the sea, and fish and neighbors, and a small town on the California coast; to be swept away along through associations and stunning imagery; to be pulled in close by the intimate voice of a good friend who knows how to swear and spool shimmering reams of language." —Nina Schuyler, author of the award-winning novel The Translator

"Deeply evocative, Toni Mirosevich’s Spell Heaven is a compelling collection whose narrator ponders memory, time, and lost worlds. With lyrical insight, she explores the mystery and the margins, the people and places, of the hardscrabble seaside town where she and her wife have made home. A gem." —Vanessa Hua, Forbidden City

"I love these stories—the delicious humor, the unvarnished exchanges, the characters in all of their wonderful, painful complexity, and Toni's gift for finding meaning in the most ordinary moments of a life. Spell Heaven triumphs again and again." —Patricia Powell, author of The Fullness of Everything and Me Dying Trial