Dispensational Truth: God's Plan and Purpose in the Ages (Hardcover) 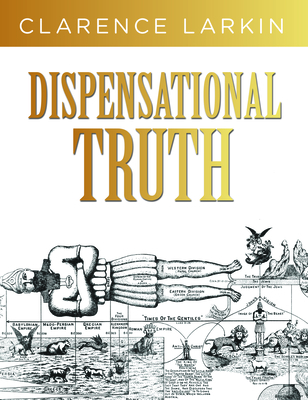 Dispensational Truth: God's Plan and Purpose in the Ages (Hardcover)


Usually Ships in 1-5 Days
Dispensational Truth is the Rev. Clarence Larkin's famous book on dispensationalism with his beautifully drawn black and white charts. A must-have book for any student of dispensationalism, the book contains more than 115 charts, maps, and drawings. The result of thirty years of study, Dispensational Truth is a gold mine of information on prophetic truth for the busy pastor, evangelist, Bible teacher, and everyone who loves God's Word. In fact, Larkin's charts have been called "the gold standard" of pre-tribulation knowledge. A trained draftsman, Larkin diagrammed what he read during his Bible studies. From his drawings and charts, the study of God's Word has enriched generations of those who seek illumination and clarification regarding history, prophecy, and the future of mankind. This book has sold thousands of copies since it was first published in 1920.
Rev. Clarence Larkin (1850-1924) was an American Baptist pastor, Bible teacher, and author whose writings on dispensationalism had a great impact on conservative Protestant visual culture in the 20th century. His intricate and influential charts provided readers with a visual strategy for mapping God's action in history and interpreting complex biblical prophecies. Born in Chester, Pennsylvania, Larkin experienced conversion at the age of nineteen. He received a college degree in mechanical engineering and had worked as a draftsman, a teacher of the blind, and a manufacturer, but felt called to ministry. After World War I broke out, God laid it on his heart to prepare a work on dispensational truth. Larkin spent three years of his life designing and drawing the charts and preparing the text. It was received to favorable acclaim both in the United States and abroad. During the last five years of his life, the demand for Larkin's books made it necessary for him to give up his pastorate and devote his full time to writing. His other works include Rightly Dividing the Word; The Book of Daniel; Spirit World; Second Coming of Christ; and A Medicine Chest for Christian Practitioners, a Handbook on Evangelism.