Teaming with Bacteria: The Organic Gardener’s Guide to Endophytic Bacteria and the Rhizophagy Cycle (Hardcover) 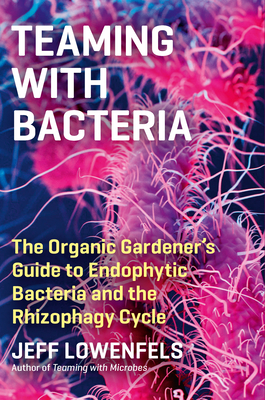 Teaming with Bacteria: The Organic Gardener’s Guide to Endophytic Bacteria and the Rhizophagy Cycle (Hardcover)


Usually Ships in 1-5 Days
In Teaming with Microbes, Jeff Lowenfels revealed the fascinating facts around the soil food web, all the tiny organisms that live in soil and aid a plants growth. In Teaming with Nutrients, he explored how those organisms aid in the uptake of nutrients. And in Teaming with Fungi, he detailed the symbiotic relationship between plants and fungi—the most important organism living in the soil.

In his new book Teaming with Bacteria, Lowenfels digs into the new science behind how endophytic bacteria supply nutrients to a large array of plants and explains, in accessible language, how this information applies to home gardeners, small-scale farmers, and cannabis growers. Based on cutting-edge science that will help gardeners increase plant health and productivity, Teaming with Bacteria is a must-have addition to every organic gardener’s library.

Jeff Lowenfels is the author several of award-winning books on plants and soil, and he is the longest running garden columnist in North America. Lowenfels is a national lecturer as well as a fellow, hall of fame member, and former president of the Garden Writers of America.