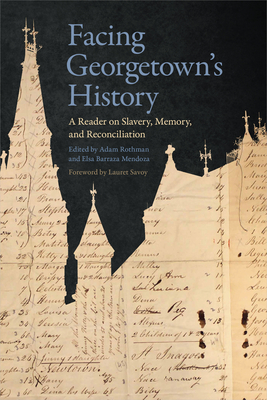 These essays, articles, and documents introduce readers to the history of Georgetown University's involvement in slavery and recent efforts to confront its troubling past. It traces Georgetown's "Slavery, Memory, and Reconciliation Initiative" and the role of universities-uniquely situated to conduct that reckoning through research, teaching, and modeling thoughtful discussion-in this movement.

Adam Rothman is a professor in Georgetown University's Department of History. He is the author of Beyond Freedom's Reach: A Kidnapping in the Twilight of Slavery, which was named the Humanities Book of the Year by the Louisiana Endowment for the Humanities and received the American Civil War Museum's book award. He is also the author of Slave Country: American Expansion and the Origins of the Deep South and the coauthor of Major Problems in Atlantic History. He served on Georgetown's Working Group on Slavery, Memory, and Reconciliation from 2015-16, and is currently the principal curator of the Georgetown Slavery Archive. He was a Distinguished Visiting Scholar at the John W. Kluge Center at the Library of Congress in 2018, where he created the podcast "African-American Passages: Black Lives in the 19th Century".Elsa Barraza Mendoza is a PhD candidate in history at Georgetown University and the assistant curator of the Georgetown Slavery Archive. She is a former Fulbright-Garcia Robles fellow. Her research has been supported by the Cushwa Center for the Study of American Catholicism and the Omohundro Institute of Early American History and Culture. She is currently writing her dissertation on the history of slavery on Georgetown's campus.Lauret Savoy is the David B. Truman Professor of environmental studies at Mount Holyoke College, where she explores the marks of history on the land. The author of Trace: Memory, History, Race, and the American Landscape, she also descends from people enslaved by Jesuits.