The Great Book of Hawaii: The Crazy History of Hawaii with Amazing Random Facts & Trivia (Paperback) 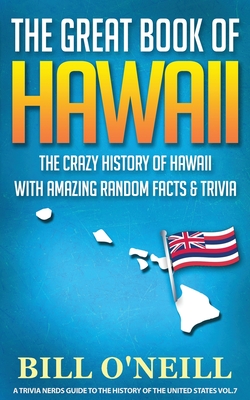 The Great Book of Hawaii: The Crazy History of Hawaii with Amazing Random Facts & Trivia (Paperback)

How much do you know about the Aloha State? There's so much to learn about Hawaii that even residents of the state don't know In this trivia book, you'll learn more about Hawaii's history, pop culture, folklore, sports, and so much more

In The Great Book of Hawaii, you'll find the answers to the following questions:

And so much more

As an added bonus, you'll learn words from the Hawaiian language throughout the book.

This book is packed with trivia facts about Hawaii. Some of the facts in this book are surprising, while others are sad or creepy. The one thing they have in common is that all of them are interesting

Whether you're just learning about Hawaii or you already think you're an expert on the state, you'll learn something you didn't know in every chapters. Your history teacher will be interesting at all of your newfound knowledge.

So, what are you waiting for? Get started to learn more about Hawaii