What We Remember: Personal Recollections of Raleigh (Hardcover) 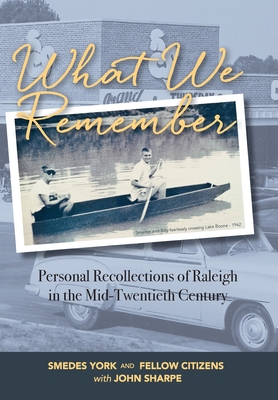 What We Remember: Personal Recollections of Raleigh (Hardcover)

What We Remember is the story of some memories as Raleigh made the transformation from a quiet capital city to a significant cultural and governmental center. The beginning of the story is from the perspective of a native son who made his first public appearance as the "Red Feather Boy" marking the success of fund raising for Community Chest through his career as a member of the city council, mayor, and businessman.

Smedes York and his family were at the center of the transformation of the city in those vibrant days after the end of World War II when returning soldiers were seeking homes for their families, and businesses were looking for new locations. In response to those demands for housing as well as shopping and business, Smedes's father James Wesley "Willie" York and his father Charles Vance York left evidence of their building and development skills throughout the city and the state.

Raleigh: What We Remember attempts to broaden the scope to view the growth and changes in the city as seen from the perspective of Smedes and others who have experienced this transformation.