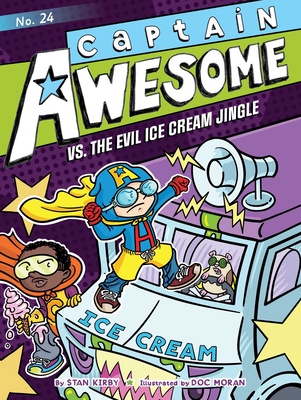 This is book number 24 in the Captain Awesome series.

Eugene goes on an epic ice cream truck adventure to fight the summer heat in the twenty-fourth Captain Awesome adventure!

Eugene McGillicudy loves everything about summer except the scorching hot weather. Sweating and feeling sticky is the worst feeling ever! But every kid knows that the best way to beat the heat is with lot and lots of ice cream! The entire neighborhood waits for the familiar jingle of Bob’s ice cream truck to drive by. But one day when Bob shows up, something about him is different! And Captain Awesome and the Sunnyview Superhero Squad are convinced that this can only mean one thing: Bob has an evil Ice Cream Clone!

With easy-to-read language and illustrations on almost every page, the Captain Awesome chapter books are perfect for beginning readers!
Stan Kirby tied a beach towel around his neck and became Super Commander Beach Boy when he was six years old. When Stan’s not creating the awesome adventures of Captain Awesome, he loves reading comic books, eating okra, and hang gliding (but not at the same time).

Doc Moran is a visual artist and illustrator with over thirty years’ experience as a cartoonist, toy designer, prop maker, and set designer. He is a graduate of Parsons School of Design and has worked for clients including babyGap, Marvel Comics, Sesame Workshop, and many more. He has a dog named Archie.