The Reunion: A Novel (Paperback) 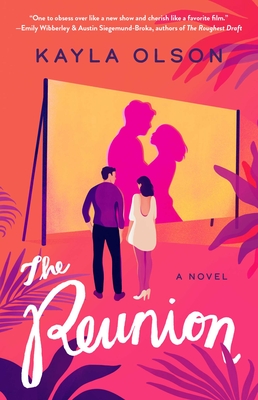 The Reunion: A Novel (Paperback)

“Liv and Ransom were co-stars on one of the most successful teen shows ever. When they reunite for a reunion special, they must face the past and being in love both on and off set. A warm blanket of a book that will make you smile.”
— Cara Dyne-Gores, The Bookshelf (OH), Cincinnati, OH

When two former teen stars reconnect at the reunion for their hit TV show, they discover their feelings for one another were not merely scripted in this charming and heartwarming novel perfect for fans of Christina Lauren and Sally Thorne.

Liv Latimer grew up on TV.

As the star of the popular teen drama Girl on the Verge, Liv spent her adolescence on the screen trying to be as picture perfect as her character in real life. But after the death of her father and the betrayal of her on-screen love interest and off-screen best friend Ransom Joel, Liv wanted nothing more than to retreat, living a mostly normal life aside from a few indie film roles. But now, twenty years after the show’s premiere, the cast is invited back for a reunion special, financed by a major streaming service.

Liv is happy to be back on set, especially once she discovers Ransom has only improved with age. And their chemistry is certainly still intact. They quickly fall into their old rhythms, rediscovering what had drawn them together decades before. But with new rivalries among the cast emerging and the specter of a reboot shadowing their shoot, Liv questions whether returning to the past is what she needs to finally get her own happy ending.
Kayla Olson is the author of two books for young adults and The Reunion. Whether writing at her desk or curled up with a good book, she can most often be found with a fresh cup of coffee and at least one cat. Find out more at KaylaOlson.com.
“The details of filming a popular show, the complications of social media, and the mania of the paparazzi make Olson’s second-chance romance a fun, fast-paced read.” —Booklist

“[B]reathtaking… Olson makes the sexual tension palpable… This tantalizing glimpse behind the scenes is sure to wow.” —Publishers Weekly

“A heartfelt, poignant look at the ups and downs of life in the spotlight. Ransom and Liv’s chemistry leaps off the page, and their journey is sweet, emotional, and thoroughly satisfying.” —Ava Wilder, author of How to Fake It in Hollywood

"The Reunion swept me off my feet. As vivid as it is sweet, I was totally immersed in this behind-the-scenes look at two actors getting their oh-so-satisfying second chance at love. I completely adored it." —Bridget Morrissey, author of A Thousand Miles

"A perfect escape. Sexy, angsty, and introspective, I loved my time on (and off) set with Liv and Ransom." —Jenna Evans Welch, New York Times Bestselling Author of Love & Gelato

“Like every iconic Hollywood love story, The Reunion sparkles incisive industry detail over the moving and deeply sweet romance of its stars, who learn with each other how to reboot their lives unscripted. Olson’s debut romance is one to obsess over like a new show and cherish like a favorite film.” —Emily Wibberley & Austin Siegemund-Broka, authors of The Roughest Draft

"In The Reunion, Kayla Olson crafts a friends-to-lovers emotional journey with panache. Liv and Ransom leap off the page, two celebrities made deeply human and sympathetic through a compelling story arc. This book hits all the right Hollywood romance notes." —Megan Bannen, author of The Bird and the Blade

"With an original twist on a friends-to-lovers romance, The Reunion is a page-turning peek at the life—and love of a Hollywood starlet and her co-star: the boy of her teenage dreams who might just be the man of her grown-up heart. This fun romance, set in the world of Hollywood glamour and celebrity gossip, is not to be missed." —Meredith Schorr, author of As Seen on TV

"The Reunion is a romantic romp through Hollywood full of charm, nostalgia, and sex appeal. Kayla Olson knows exactly how to tug on your heartstrings; Liv and Ransom's chemistry felt so real. I devoured it in a single sitting!" —Hannah Orenstein, author of Meant to Be Mine

“Readers, especially those who were fans of Dawson’s Creek, One Tree Hill, and similar shows will enjoy the Hollywood setting and cast of fully realized supporting characters in this excellent contemporary romance. A must-read for fans of Christina Lauren, Emily Henry, and early 2000s teen drama shows.” —Library Journal