The Hopkins Manuscript: A Novel (Paperback) 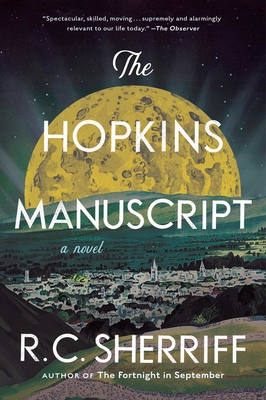 The Hopkins Manuscript: A Novel (Paperback)


Usually Ships in 1-5 Days
A stunning speculative novel about a small English village preparing of the end of the world.

Edgar Hopkins is a retired math teacher with a strong sense of self-importance, whose greatest pride is winning poultry-breeding contests. When not meticulously caring for his Bantam, Edgar is an active member of the British Lunar Society. Thanks to that affiliation, Edgar becomes one of the first people to learn that the moon is on a collision course with the earth.

Members of the society are sworn to secrecy, but eventually the moon begins to loom so large in the sky that the truth can no longer be denied. During these final days, Edgar writes what he calls “The Hopkins Manuscript”—a testimony juxtaposing the ordinary and extraordinary as the villagers dig trenches and play cricket before the end of days.

First published in 1939, as the world was teetering on the brink of global war, R.C. Sherriff’s classic science fiction novel is a timely and powerful missive from the past that captures human nature in all its complexity.
R.C. Sherriff was born in 1896. He worked in an insurance office until he joined the East Surrey regiment early in World War I. In 1917, he was severely wounded at Ypres. Journey’s End, based on his letters home from the trenches, was an enormous success and became a classic. In the 1930s, Sherriff went to Hollywood to write the script for The Invisible Man, and subsequently worked on the script for Mrs. Miniver, Goodbye Mr. Chips, and many other successful films. He wrote several novels, including The Fortnight in September, Greengates, and The Hopkins Manuscript before his death in 1975.
“This wonderful, disturbingly relevant novel inaugurated a genre of dystopian fictiion in which the hero survives the apocalypse.” — The New York Times Book Review, Editors' Choice

“A triumph... masterfully captures the way the graspable and mundane can overpower the incomprehensibility of existential threat. Though written more than 75 years ago about a world without internet or television, The Hopkins Manuscript manages to feel entirely contemporary.” —Booklist, *starred review*

“This wonderful novel should powerfully resonate with readers whose consciences are troubled by inequality and climate change... Like Kazuo Ishiguro, Sherriff is a master at framing a story through the narrator’s circumscribed point of view.” —Alec Nevala-Lee, The New York Times Book Review

“This delivers on multiple levels... It has the effect of H.G. Wells rewritten by Evelyn Waugh, and the narrator’s reflections continue to resonate... Sherriff’s a confident and graceful stylist.”
—Publishers Weekly

“I loved this book, by turns funny and tragic ... It moves between abject despair and good old-fashioned British stoicism with ease. Magical"
—Jeff Noon, Spectator

“A glorious comic novel about the end of the world… RC Sherriff’s novel, like all great speculative fiction, rests not on its plausibility, but on the glimpses it shows us of our own face… The book crackles with juxtapositions of the everyday and the extraordinary… What a weird and brilliant talent he had... Hopkins...was his finest hour.”
—Andrew Hunter Murray, The Times (UK)

“Spectacular, skilled and moving and supremely and alarmingly relevant to our life today.”
—Fay Weldon, The Observer (UK)