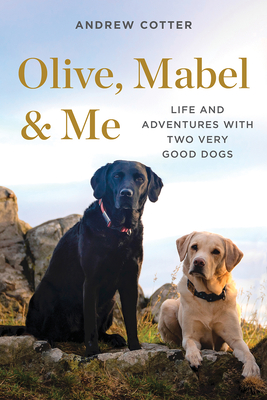 The story of Olive and Mabel, Labrador retrievers who rose to internet fame as the subjects of Andrew Cotter's BBC sports parodies.

When sporting events were put on hold in March 2020, commentator Andrew Cotter shifted to working from home. The one-on-one competitors? His two Labrador retrievers, Olive and Mabel. In the hilarious videos that ensued, the dogs engage in various contests, from bone-snatching and breakfast-eating to crushing it on the dog walk, while Cotter narrates to hilarious effect. The scene of Mabel, simply standing still in a fetid pond was one of the most popular. Why? Because this is how dogs live, and Cotter captured it with humor and joy. It’s why the series has been viewed more than 50 million times, entertaining dog owners, sports fans and celebrities around the world. Olive and Mabel are more than online celebrities, however, as revealed in this charming narrative. Filled with stories about how Cotter fell in love with his dogs, his passion for hiking with them through the glens and over the peaks of his native Scotland, and the ongoing relationship between Olive and Mabel (particularly the “competitive fire” lit during these days of quarantine), the memoir is by turns side-splittingly funny and thoughtfully tender. It’s sure to resonate with all dog lovers.

Andrew Cotter is one of the leading commentators on the BBC’s golf, rugby, tennis, and athletics coverage. He has also worked for Sky, BT Sport, ITV, Channel 4, ESPN and Eurosport. When not covering some of the world’s great sporting events, he’s usually up a mountain with his dogs.
Beautifully written . . . As funny as you would hope
— The Times[UK]

Just what we are needing now, Olive, Mabel & Me: Life and Adventures with Two Very Good Dogs is a rare treat of a book that will make you laugh aloud and perhaps expand your understanding of your dogs too.