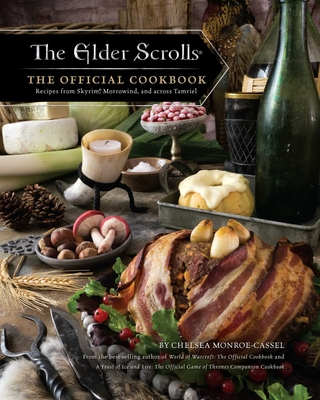 
Usually Ships in 1-5 Days
Feast your way through Skyrim, Morrowind, and Tamriel with The Elder Scrolls: The Official Cookbook.

Feast on all of the delicious dishes found in Skyrim, Morrowind, and all of Tamriel in this beautifully crafted cookbook based on the award-winning Elder Scrolls game series. Immerse yourself in the diverse cuisines of the Nords, Bosmer, Khajit, and beyond with these recipes inspired by food found in the Old Kingdom, across Tamriel, and more. With over sixty delicious recipes for fan-favorite recipes including Apple Cabbage Stew, Sunlight Souffle, Sweetrolls, and more, The Elder Scrolls: The Official Cookbook will delight every hungry Dragonborn.
Chelsea Monroe-Cassel is the coauthor of A Feast of Ice and Fire: The Official Game of Thrones Companion Cookbook and the author of World of Warcraft: The Official Cookbook, Hearthstone: Innkeeper's Tavern Cookbook, and The Elder Scrolls: The Official Cookbook. Her work is a synthesis of imagination and historical research. This passion has led her to a career of transforming imaginary foods into reality. She greatly enjoys foreign languages, treasure hunting, history, and all things related to honey.
"The Elders Scrolls Cookbook is sure to be the perfect piece to inspire all of my future dinner parties."
— Unilad

"This is absolutely amazing."
— Tales of Tamriel Podcast