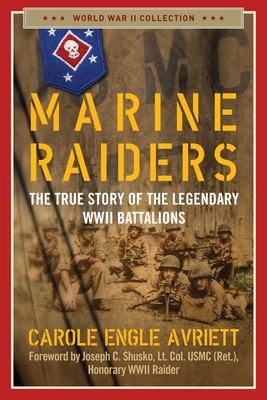 
Usually Ships in 1-5 Days
Readers of Stephen E. Ambrose and E.B. Sledge will rejoice. The story of a special operations unit formed in World War II called the Marine Raiders whose commanders included the President's son. They are greatest warriors you never heard of!

The American people revere their elite combat units, but one of these noble bands has been unjustifiably forgotten—until now.

At the beginning of World War II, military planners set out to form the most ruthless, skilled, and effective force the world had ever seen. The U.S. Marines were already the world’s greatest fighters, but leadership wanted a select group to conduct special operations at the highest level in the Pacific theater. And so the Marine Raiders were born.

These young men, the cream of the crop, received matchless training in the arts of war. Marksmen, brawlers, and tacticians, the Marine Raiders could accomplish their objective before the enemy even knew they were there.

These heroes and their exploits should be the stuff of legend. Yet even though one of their commanders was President Roosevelt’s son, they have disappeared into the mists of history—the greatest warriors you’ve never heard of.

The Marine Raiders were one of the greatest forces ever to take the field under the American flag. After reading this book, you’ll know why.
Growing up in a family steeped in military history, Carole Engle Avriett often heard her uncle—chief mechanic for Gen. Claire Lee Chenault’s Flying Tigers—insist, “Ain’t no fake stories ever gonna outdo the real ones.” Convinced that he was right, Avriett pursued a career as an editor with Southern Living Magazine for nearly fifteen years recording real-life stories, then as an author at the intersection of true-life narratives and military history. Coffin Corner Boys is her sixth book.

Avriett graduated from the Uni. of California, Davis, with a BA of double majors in English and History, specializing in Military History. She received a Masters of Education with a concentration in English Composition from the Auburn Uni. where she taught Advanced Composition while working on doctoral level course-work in Literature.