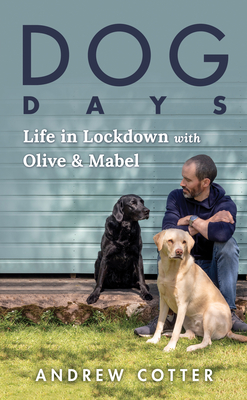 Join two of the internet's favorite dogs and their owner, sports broadcaster Andrew Cotter, as he shares journal entries from life during the pandemic lockdown.

Are you sitting nicely? Good. Let's discover exactly what happened after two superstar Labradors chewed up the lockdown internet and found it really quite tasty.

He's not kept a journal for decades but here, in Dog Days, Andrew Cotter draws inspiration from the great Samuel Pepys; like him, he bears witness to the extraordinary everyday as the world tilts on its axis in our own unsettling era.

And so, with Olive and Mabel at his side—actually, dawdling in the long grass or sleeping upside down—Andrew takes a clear-eyed, often hilarious walk through a year that encompasses all of life from the crushingly mundane to the decidedly odd.

Followed by whispers of "Is that really Olive and Mabel?"—not to mention the occasional Hollywood approach—the three of them pad around literary festivals, breakfast TV, live radio, and even an appearance on Good Morning America. Slightly bemused by their fame, Andrew not only pitches up in the iconic Mastermind chair, but makes a return to sports broadcasting to find that it has become rather strange as well.

But, always, his pair of utterly endearing, endlessly optimistic and eternally hungry canine companions show just how precious our time is. Especially our time spent in the devoted company of dogs. For fans new and old, this witty, insightful account of a year like no other is an unmissable treat.

Andrew Cotter is one of the most recognizable voices in sports broadcasting as a leading commentator on the BBC's golf, rugby, tennis, and athletics coverage. Originally from Troon in Ayrshire, Andrew now lives in Cheshire and as you can see from some of his pictures and videos on Twitter, YouTube and Instagram, when not covering some of the world's great sporting events he's often to be found up a mountain, handing out dog treats.