Presence and Social Obligation: An Essay on the Share (Paperback) 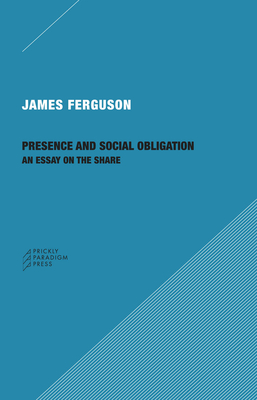 Presence and Social Obligation: An Essay on the Share (Paperback)


Email or call for price
In precarious and tumultuous times, schemes of social support, including cash transfers, are increasingly indispensable. Yet the inadequacy of the nation-state frame of membership that such schemes depend on is becoming evermore evident, as non-citizens form a growing proportion of the populations that welfare states attempt to govern. In Presence and Social Obligation, James Ferguson argues that conceptual resources for solving this problem are closer to hand than we might think. Drawing on a rich anthropology of sharing, he argues that the obligation to share never depends only on membership, but also on presence: on being “here.” Presence and Social Obligation strives to demonstrate that such obligatory sharing based on presence can be observed in the way that marginalized urban populations access state services, however unequally, across the global South. Examples show that such sharing with non-nationals is not some sort of utopian proposal but part of the everyday life of the modern service-delivering state. Presence and Social Obligation is a critical yet refreshing approach to an ever-growing way of being together.

James Ferguson is the Susan S. and William H. Hindle Professor in the School of Humanities and Sciences, and professor in the Department of Anthropology at Stanford University.