Sands of Sirocco: A Novel of WWI (Hardcover) 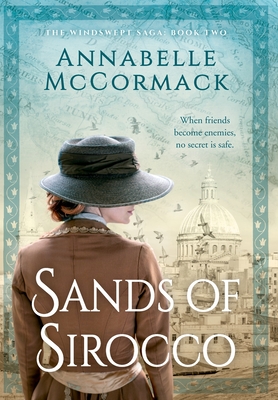 Sands of Sirocco: A Novel of WWI (Hardcover)

Return to a world of secrets, love, and spies in this historical novel of epic romance, dangerous deceit, and gripping adventure in the Middle Eastern front of the Great War the second book of The Windswept WWI Saga by author Annabelle McCormack.

Egypt, 1917: British nurse Ginger Whitman thought she escaped the intrigue that devastated her family and threatened her life on the desert sands of WWI Palestine. But when she's drafted into an investigation for the Cairo Intelligence Department, she uncovers forces at work to destroy the man she loves: intelligence officer Noah Benson.

As an old enemy resurfaces, Ginger and Noah are pulled into a minefield of lies, greed, and political deception that threatens the stability of the British alliance. With an enemy that knows their secrets, no one they love is safe. But nothing is what it seems-and a far more nefarious foe may be toying with them both.

Sands in Sirocco is the second novel in the Windswept WW1 Saga, a historical fiction series featuring a strong female protagonist. A story of spies, family drama, romance, and epic adventure, it is set in the British Middle Eastern front of the First World War. This novel contains violence, mild language, and romantic, steamy scenes.