Dahomey and the Slave Trade: An Analysis of an Archaic Economy (Paperback) 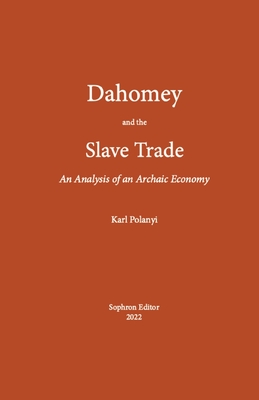 Dahomey and the Slave Trade: An Analysis of an Archaic Economy (Paperback)

The death of Karl Polanyi in 1964, at seventy-seven, curtailed a productive life in the fields economic history and economic anthropology. Some of his students-impressed with his erudition and disregard for the ordinary-described him as "otherworldly".

He was founder of the Galilei Society in Budapest, the cradle of the liberal revolutions in Hungary in the first decades of the 20th. century. In the first World War, he was a cavalry officer and after that war he went to Vienna. There he became a columnist and commentator for the Oesterreichische Volkswirt, in charge of analysis of international affairs. For years he read daily The Times, Le Temps, the Frankfurter Zeitung, all the Vienna papers and those from Budapest and others as they were relevant.

He emigrated to England where he became a tutor for Oxford University and the University of London and wrote re-analysis of English economic history: The Great Transformation.

After World War II, Polanyi came to Columbia University to teach economic history. His courses were always popular and well attended. During his last years at Columbia, and during his early years of retirement, Polanyi was joined by Conrad Arensberg in heading a large interdisciplinary project for the comparative study of economic systems. The volume that resulted was Trade and Market in the Early Empires, a landmark in economic anthropology and economic history.

Polanyi's interest in Dahomey stems from one of his students who had contributed two papers on Dahomey to Trade and Market. Polanyi grew interested and, with characteristic thoroughness, read the literature on that West African kingdom. The present book resulted from these last years of productive scholarship.

Dahomey and the Slave Trade was prepared for the press by his widow, Ilona Duczynska Polanyi.

This book is of vital importance to anthropology for several reasons, the most compelling being that the concerns of history and of anthropology are overlapped in it. Besides making available the economic history of one of the great West African kingdoms, it sets forth some new theory for economic anthropology-particularly Part III, in which Polanyi makes sense of the intricacies of trade between a people with a fully monetized economy, and one without, and those passages in which he adds "house-holding" as a concept to his ideas about the principles of economic integration.

Polanyi's position in economic anthropology-not to mention the status he achieved as economic historian, translator of Hungarian literature, man of action, and inspiring teacher-is secure. He has enabled anthropologists to focus their studies of economy on processes of allocation rather than on processes of production, thereby bringing the studies into line with economic theory without merely "applying" economic theory to systems it was not designed to explain. The "release" that resulted from this great stride forward can be compared, for economic anthropology and studies in comparative economics, with the importance of the discovery in the late nineteenth century of the price mechanism itself. The more we know about the workings of other, and strange, economies, the more we can know of our own. Polanyi's work will stand as a major source of comparative insight-the core of anthropological purpose.