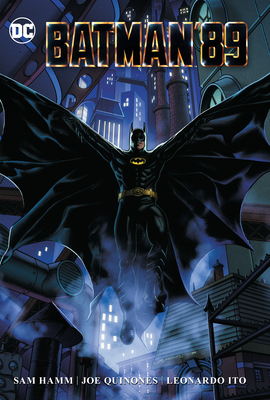 
Usually Ships in 1-5 Days
Continuing the adventures of the Dark Knight from Tim Burton's classic movie Batman, Batman '89 pulls on a number of threads left dangling by that film while continuing in the tradition of DC's very successful Batman '66 series.

In 1989 moviegoers were amazed at the new vision of the Dark Knight brought to the screen by filmmaker Tim Burton, starring Michael Keaton as Batman and Jack Nicholson as The Joker. Now, in the tradition of DC's very successful Batman '66 series, Batman '89 is set in a truly gothic Gotham City and features colorful villains including The Joker, Two-Face, and many more.

Collects the first 12 chapters of the Batman '89 digital comics series.
Sam Hamm is an American screenwriter known for the movies Batman and its sequel Batman Returns. He wrote a story in Detective Comics for Batman's 50th anniversary "Batman: Blind Justice", and is now back at DC to pull on a number of threads left dangling in Batman '89.