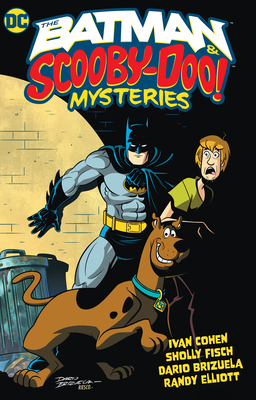 
Usually Ships in 1-5 Days
The Dark Knight teams up with Scooby-Doo and the sleuths of Mystery Inc. in a series of adventures and mysteries!

It all starts when Batman discovers his original purple gloves are missing—Velma, Shaggy, and Scooby-Doo will have to go back in time to solve the case!

And when a ghost starts haunting the Batcave, there's no one like Scooby-Doo and Mystery Inc. to help Batman get to the bottom of it! Even if the ghost turns out to be fake....how did someone get into the Batcave to create a phony phantom?

Catch these adventures and more in The Batman & Scooby-Doo Mystery Vol. 1, collecting The Batman & Scooby-Doo Mysteries #1-12!
By day, Sholly Fisch is a mild-mannered developmental psychologist who has helped produce dozens of educational TV series, digital games, magazines, and hands-on materials, including Sesame Street, Cyberchase, The Magic School Bus Rides Again, The Cat in the Hat Knows a Lot About That, and lots of things you've probably never heard of. He's spent more than 30 years prowling the night to write everything from Superman to Star Wars to Scooby-Doo. He lives with his lovely wife Susan and brilliantly talented children Nachum, Chana, and Miriam, who hope he'll get more sleep someday.