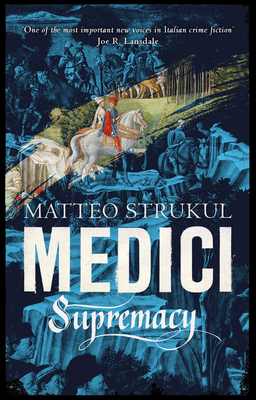 Winner of the Premio Bancarella, 2017

The second instalment in a prize-winning series charting the rise of the House of Medici as they become Masters of Florence and progenitors of the Renaissance.

The Medici family is preparing for the marriage of its son and heir Lorenzo. His heart belongs to another, but this union will strengthen the alliance with a powerful Roman family.

Torn between love and power, the bounties and the compromises of governing, Lorenzo has become complacent. He has forgotten the bloody path he forged on his ascent to power, and the enemies left in his wake.

When the family's historical enemies and shadowy new conspirators put their bloody plot into action, the consequences will be terrible. In order to protect their supremacy, the Medici will enact a violent vengeance from which few will be spared.

Matteo Strukul was born in Padua in 1973 and has a Ph.D. in European law. His novels are published in twenty countries. He writes for the cultural section of 'Venerdì di Repubblica' and lives with his wife in Padua, Berlin and Transylvania.