When Things Get Dark: Stories inspired by Shirley Jackson (Hardcover) 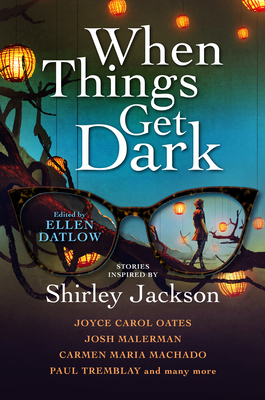 When Things Get Dark: Stories inspired by Shirley Jackson (Hardcover)

Jackson and Datlow together at last: a combo as perfect as chocolate and peanut butter. I cannot oversell this collection, for which the renowned editor assembled a stellar cast of contributors and original stories inspired by one of the previous century’s greatest authors. The full range of Jackson’s work is reflected here: precise language and eerie narrative ambiguity, supernatural horror, creeping psychological dread, familial dysfunction, and that nearly indefinable otherness that’s so singularly Jacksonian. I love anthologies, but even the best inevitably contain a story or two that miss the mark — except this one. There ain’t a dud in the bunch, people. One of my absolute favorites of 2021.~ Luciano

— From Luciano
A chilling anthology of 18 short stories in tribute to the genius of Shirley Jackson, collecting today’s best horror writers.

A collection of new and exclusive short stories inspired by, and in tribute to, Shirley Jackson.

Shirley Jackson is a seminal writer of horror and mystery fiction, whose legacy resonates globally today. Chilling, human, poignant and strange, her stories have inspired a generation of writers and readers.

This anthology, edited by legendary horror editor Ellen Datlow, will bring together today’s leading horror writers to offer their own personal tribute to the work of Shirley Jackson.

"Other stories are equally memorable, but for me, the outstanding one is Skinder's Veil, a breathtaking blend of fairytale, dream and reality by the incomparable Kelly Link." – The Guardian

"This compilation of stories that make the mundane seem terrifying is chilling and uncanny, offering tropes that will be familiar to readers of Jackson’s work (witchy women, eerie suburbia) but with unique touches that could come only from these individuals authors." - New York Public Library Best Books

"A joy for Jackson fans, but no Jackson knowledge is needed to enjoy this anthology. A gem in its own right." – SFX

"If you're a fan of Shirley Jackson, you're bound to find something here that moves you the way her stories did." – LitReactor best of 2021

"A​n often unsettling collection of top-notch tales that explore the darkest corners of the mundane, teasing out the anxiety, terror, and neurosis from the ordinary that Jackson was a master at conveying in her work.​" -Dark Scribe Magazine ​

"No one consistently delivers like Datlow does." – Horror DNA

"This anthology is classic horror in its appearance, but in the inside has modern sensitivities with standout prose. Shirley Jackson would’ve been proud" – Last Sentence

"Compiling a short story anthology that caters to a wide audience’s taste is no small feat. Ellen Datlow has done a brilliant job of curating a selection of stories which are not only varied in style and topic, but of high quality. Whether you prefer your creepiness level at one or eleven, with a good dose of blood and gore or just with a hint of psychological suspense, you will find a favourite which appeals to your taste in this collection." – Crime Fiction Lover

"Unsettling, disquieting, even disorienting... This collection is special. Somewhere, Shirley Jackson is peering over those glasses of hers, one eyebrow raised, a sly smile on her lips" – Dave Writes and Draws

"Even the most voracious of readers is sure to be swept away by the sheer magnitude of talent on display in When Things Get Dark." – Phantastiqa

"Datlow did it again... every piece was entertaining" – Happy Horror Writer

"If you are looking for an overview of what the current literary horror world looks like, this is a fantastic example" – California Reading

"A thrilling encounter with the uncanny courtesy of the some of the best contemporary horror writers." – End of the Words

"From haunting to eerie to downright terrifying, there is something for every reader" – Mandy McHugh

"I thoroughly enjoyed reading this anthology [..] so I have no hesitation in recommending it." – Stephen Bacon

"This is an absolute treat whether you’re a Shirley Jackson nut or not." — Den of Geek best of 2021