The Best of Intentions - 50 Thoughts on Freedom (Paperback) 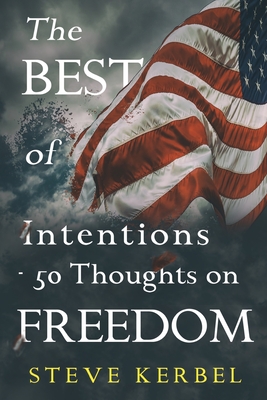 The Best of Intentions - 50 Thoughts on Freedom (Paperback)

Steve Kerbel's The Best of Intentions - 50 Thoughts on Freedom is an eye-opening book that explores the underlying truth of politics in America. As can be recognised, the narrative in US politics is mostly centred on the idea of there being two teams, the Left and the Right. Kerbel argues that when we join up with one of these teams, we ignore a deeper evil that can come from either side. The Best of Intentions explores these ideas from a third view. This third view takes into account a lifetime of lessons that have been learned by Kerbel, who has insightfully compiled these into this book, succinctly in its concluding fifty points. Kerbel's The Best of Intentions - 50 Thoughts on Freedom is perfect for anyone with an interest in politics, and an interest in looking at the world in a well-rounded way, informed by history.

'In politics none of us can agree with anyone completely. When you boil it down we are all independent when it comes to our thoughts and beliefs. When the writers of the constitution formed our republic they warned of political parties, believing in independent candidates that would serve and then get out of government. I think Steve Kerbel's book is thought provoking and although you may not agree with everything he has to say he says it in a way that invokes thought and debate. Steve and I both ran for the Libertarian nomination for president in 2016. I can say unequivocally that he was both a gentleman and that he cared deeply for the future of our country. Read the book ' Gary Johnson - 2016 Libertarian Party Presidential Nominee.