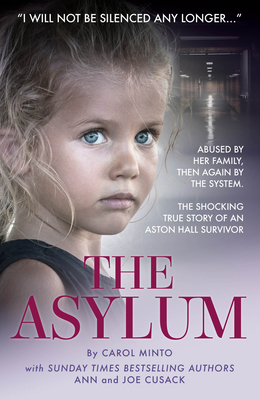 
Email or call for price
For 46 years, Carol Minto has quietly gone about her life, carrying with her the most extraordinary and heartbreaking secrets.

Born into poverty and with mostly absent parents, Carol helped to raise her nine siblings. But when she was just 11 years old, her older brother began to sexually abuse her. After four years, Carol managed to escape – and ran away from home.

Picked up by social services they place her at Aston Hall in Derby; a psychiatric hospital now infamous for the ghoulish ‘truth serum’ experiments it carried out on children. Over three years, Carol was stripped, sedated, assaulted and raped by Kenneth Milner, the doctor in charge.

Eventually she is released back into the community, aged 18, and has a daughter. But the baby is taken away for adoption and Carol’s trauma intensifies. In 2010 Carol finally plucked up the courage to speak out about the abuse she suffered – and received justice, at last.

In The Asylum, Carol tells the full story of how she overcame unimaginable suffering, to find the happiness and solace she has today as a mother and grandmother.
This is Carol Minto's first book. Ghostwriters Joe and Ann Cusack have worked together on news and features for 20 years. Their first title, Sold in Secret. was published by Blink in November 2018.