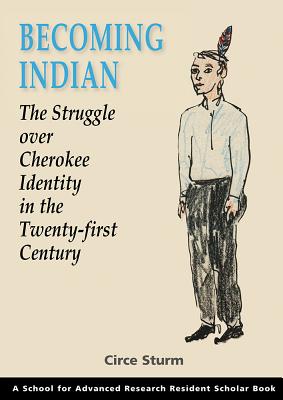 In Becoming Indian, author Circe Sturm examines Cherokee identity politics and the phenomenon of racial shifting. Racial shifters, as described by Sturm, are people who have changed their racial self-identification from non-Indian to Indian on the US Census. Many racial shifters are people who, while looking for their roots, have recently discovered their Native American ancestry. Others have family stories of an Indian great-great-grandmother or grandfather they have not been able to document. Still others have long known they were of Native American descent, including their tribal affiliation, but only recently have become interested in reclaiming this aspect of their family history. Despite their differences, racial shifters share a conviction that they have Indian blood when asserting claims of indigeneity. Becoming Indian explores the social and cultural values that lie behind this phenomenon and delves into the motivations of these Americans--from so many different walks of life--to reinscribe their autobiographies and find deep personal and collective meaning in reclaiming their Indianness. Sturm points out that becoming Indian was not something people were quite as willing to do forty years ago--the willingness to do so now reveals much about the shifting politics of race and indigeneity in the United States.