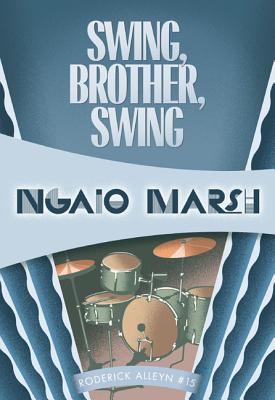 This is book number 15 in the Inspector Roderick Alleyn series.

Lord Pastern and Baggot is a classic English eccentric, given to passionate, peculiar enthusiasms. His latest - Drumming in a jazz band. His wife is not amused, and even less so when her daughter falls hard for Carlos Rivera, the band's sleazy piano player. Aside from the young woman, nobody likes Rivera very much, so there's a wealth of suspects when he is shot in during a performance. Happily, Inspector Alleyn is in the audience.
Ngaio Marsh, born Edith Ngaio Marsh in 1895, grew up in Christchurch, New Zealand. She wrote 32 mystery novels between 1934 and 1982, earning her widespread acclaim and comparisons to Agatha Christie, Dorothy Sayers, and Margery Allingham. In addition to writing, she pursued her passion for theater and directed a number of plays as a member of the University of Canterbury Drama Society. She also wrote plays, essays, and an autobiography titled Black Beech and Honeydew. In 1966 she was named Dame Commander of the Order of the British Empire for her accomplishments in the arts, and in 1978 she was named Grand Master by the Mystery Writers of America. Dame Ngaio Marsh split her time between New Zealand and the UK, and died in Christchurch in 1982. Her home there is now a museum