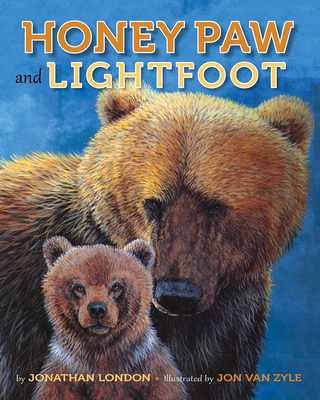 
Usually Ships in 1-5 Days
In Honey Paw and Lightfoot, readers are given a firsthand, compelling glimpse of grizzly bears. Illuminated by Jonathan's London spare, lyrical text and Jon Van Zyle's spectacular illustrations, this is the story of mama bear Honey Paw and her offspring Lightfoot, from his earliest days as a newborn, no bigger than a hamster, to curious cub to adolescent bear ready to head off on his own. And tor readers who want to learn more, there is an afterword providing detailed information about grizzly bears including their relationship to indigenous cultures of the north and threats to their survival.
Jonathan London has written more than one hundred picture books for children, many of them about wildlife. He is also the author of the popular Froggy series. He lives with his family in northern California. www.jonathan-london.net. Jon Van Zyle's art has garnered him numerous honors. His prints, posters, and lithographs are prized by collectors. Jon and his wife live in Alaska, where they maintain a dog team of Siberian huskies. www.jonvanzyle.com