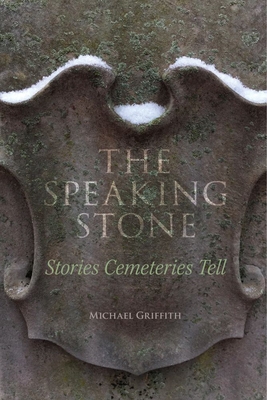 Rather than sticking to the cemetery’s most famous, or infamous, graves, Griffith stays true to the principle of ramble and incidental discovery. The result is an eclectic group of subjects, ranging from well-known figures like the feminist icon and freethinker Fanny Wright to those much less celebrated— a spiritual medium, a temperance advocate, a young heiress who died under mysterious circumstances. Nearly ninety photos add dimension and often an element of playfulness.

The Speaking Stone examines what endures and what does not, reflecting on the vanity and poignancy of our attempt to leave monuments that last. In doing so, it beautifully weaves connections born out of the storyteller’s inquisitive mind.

Michael Griffith is the author of the novels Trophy and Spikes and the story collection Bibliophilia. He is professor of English at the University of Cincinnati.
“Griffith finds a fruitful ground for his research into the past in the third largest [cemetery] in the country, that contains poignancies and mysteries alike. Entertaining...a fine prose rejoinder to Spoon River Anthology and other similar works.”
— Kirkus Reviews

"Michael Griffith is a masterful and quirky storyteller, and his new book will be known to future generations as one of the great literary oddities. I would be happy to sell it out of the trunk of my car – that’s how much I love The Speaking Stone."
— David Kirby, Robert O. Lawton Distinguished Professor of English, Florida State University

"The Speaking Stone is a brilliant book of essays springing from Griffith’s soulful rambles around a cemetery in Cincinnati. It’s an ingenious anti-memoir full of strange and delightful tales from the lost corners of history, not least among them those concerning the author himself."

"Michael Griffith's The Speaking Stone is a marvel: a marvel of erudition, a marvel of curiosity and craft, a marvel of intellect and openness. This a book that is obsessed—with gravestones and signs and cities, sure, but also with the stories of the people who made the signs, who are under the stones, who lived in the cities. Those people are gone, but wherever they are, I hope they realize how lucky they are that Michael Griffith is the one telling their stories. By telling their stories, Griffith has come up with a one-of-a kind way of telling our own, and his own. What a wise, funny, deeply humane book!"
— Brock Clarke, author of Who Are You, Calvin Bledsoe?

"These essays track the subtle ways history intersects with individuals, and they remind us that pride and ambition lead inexorably to oblivion. Griffith simultaneously sharpens our sympathy for solitary lives and chastens us for harboring fantasies of immortality."
— Sean Kinch

"The Speaking Stone: Stories Cemeteries Tell is a collection of non-fiction essays inspired by its author Michael Griffith’s daily walks in Cincinnati’s historic Spring Grove Cemetery. Each chapter takes a deep dive into the life of one or more of the people whose gravesites Griffith randomly encountered during his constitutionals at sprawling (733 acres) Spring Grove. . . . While The Speaking Stone is deeply researched and written, Griffith has some fun with his work as well, chiefly by throwing pop culture references into the mix."
— PopMatters