Late to the House of Words: Selected Poems of Gemma Gorga (Paperback) 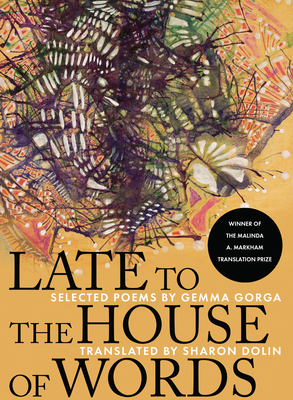 Late to the House of Words: Selected Poems of Gemma Gorga (Paperback)


Usually Ships in 1-5 Days
The first book in the inaugural series Malinda A. Markham Memorial Translation Prize, Late to the House of Words: Selected Poems of Gemma Gorga brings together in one volume poems from six of this contemporary Catalan poet’s books, introduced, selected, and translated by the award-winning American poet and translator Sharon Dolin. In this bilingual edition, readers will become acquainted with the breadth of Gorga’s work in lineated verse, which spans more than twenty years. Readers of her book of prose poems, Book of Minutes, also translated by Dolin, will find all of Gorga’s preoccupations—with language, with metaphysics, with poetry’s dance between word and silence—expanded here in poems that are as limpid yet intricate as the work of Jane Hirshfield. Translated from Catalan, a European language that has a long history of fraught political implications for those who use it, this is a necessary book.
Sharon Dolin is the author of six books of poetry, most recently Manual for Living (University of Pittsburgh Press, 2016) and Whirlwind (Pittsburgh, 2012). Her fourth book Burn and Dodge (Pittsburgh, 2008) won the AWP Donald Hall Prize for Poetry. Her translation of Gemma Gorga’s Book of Minutes (Field Translation Series: Oberlin College Press, 2019) received grants from PEN and Institut Ramon Llull. Her prose memoir Hitchcock Blonde (2020) was published by Terra Nova Press. The recipient of a 2021 NEA Fellowship in Translation, she is Associate Editor of Barrow Street Press and directs Writing About Art in Barcelona. Gemma Gorga (born in Barcelona in 1968) has published seven collections of poetry in Catalan. Her most recent collections are Viatge al centre (Godall Edicions, 2020) and Mur (Barcelona: Meteora, 2015), which won the Premi de la Critica de Poesia Catalana. Her other recent books include her essay on India, Indi Visible (Barcelona, 2018) as well as translations from English to Catalan of the Indian poet Dilip Chitre and a co-translation of selected poems by Edward Hirsch. She is Professor of Medieval and Renaissance Spanish Literature at the University of Barcelona.
"In a Spain (indeed a world) where the legitimacy of Catalan language and culture must be continually defended (the language was once banned from public use by Franco), Gemma Gorga’s celebration of the protean vitality and champion beauty of words comes as no surprise. The highest kudo that I can give Sharon Dolin’s remarkable translations is that the poems, in this impressive sampler of six of Gorga’s books, seem reliably adept and effortless, allowing Gorga’s verse to dazzle and beguile us in English. There’s an air of enchantment to her work (“The bee drew near my lips to dictate / the beginning of a poem…”). With the sheer inventiveness and will of a contemporary Scheherazade, with the flint of her at-the-ready intelligence, Gemma Gorga strikes sparks again and again." —Cyrus Cassells, author of More Than Watchmen at Daybreak and Still Life with Children: Selected Poems of Francesc Parcerisas