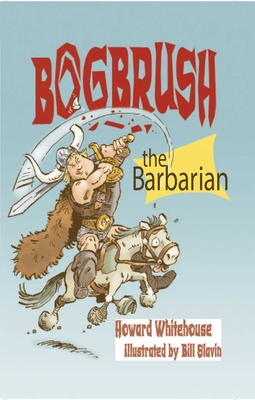 
Email or call for price
Bogbrush seeks adventure on his family cow, while educating the reader

Bogbrush, grandson of the fabled Bumrash, is a mighty warrior from the frozen north. He is a giant of a lad, with rippling muscles and a powerful sword-arm. He wears chain-mail underwear and a helmet with really big horns. Unfortunately, he’s also very stupid. Mistaking-the-family-cow-for-a-monster kind of stupid.
But Bogbrush is determined to seek his fortune with undaunted courage (whatever that means). Crouched over his noble steed, Nobby, he sets forth on a heroic quest, traveling from the Temple of the Great Belch, where he battles a fiendish monster and encounters a terrifying gerbil, to a city in the far south where he attempts to pull a legendary axe from a rock and become the one true king. Fortunately, along the way, Bogbrush meets some fellow adventurers who have a little more between the ears. Together they must outwit a trickster, an evil sorcerer and tiny little ape-men, none of which is easy when you are “three buckets short of a cartload.”
A sidesplitting epic adventure, Bogbrush the Barbarian also includes “educational” sidebars featuring words of the day, career tips, advice about guinea pigs and lots of other things you’ve probably never wondered about. You’ll even learn to speak like a barbarian — although, unlike Bogbrush, you’ll actually understand what you’re saying!