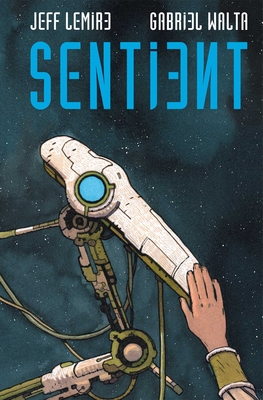 WELCOME TO THE U.S.S. MONTGOMERY. When a separatist attack kills every adult on board a colony ship in deep space, it is up to VALARIE, the on-board A.I., to help the ship's children survive. But as they are pursued by dangerous forces, can Valerie become more than what she was programmed to be - a savior to these children?

TKO is proud to present the ultimate edition of Jeff Lemire and Gabriel Walta's instant sci-fi classic, and Eisner-Award nominee. This deluxe hardcover features over 70 pages of bonus material including never-before seen script excerpts, concept art, progress art, and much more.
Jeff Lemire, writer of SENTIENT for TKO Studios, is the award-winning, New York Times best-selling author of such graphic novels as Essex County, Sweet Tooth, Underwater Welder and Roughneck as well as co-creator of Descender with Dustin Nguyen, Black Hammer with Dean Ormston, Plutona with Emi Lenox and A.D.: After Death with Scott Snyder.

He collaborated with celebrated musician Gord Downie on the graphic novel and album The Secret Path, which was made into an animated film in 2016. Jeff has won numerous awards including an Eisner Award and Juno Award in 2017. He has also written extensively for both Marvel and DC Comics.

Many of his books are currently in development for film and television, including both Descender and A.D.: After Death at Sony Pictures, Essex County at the CBC, Underwater Welder and Plutona at Waypoint Entertainment and Gideon Falls with Hivemind Media.

Steve Wands is a Comic Book Letterer, Artist, and Indie author. He works on top titles at DC Comics, Vertigo, Image, and Random House. He’s the author of the STAY DEAD series, co-author of TRAIL OF BLOOD, and is a writer of short stories. When not working he spends time with his wife and sons in New Jersey.
"Lemire and Walta really have a masterpiece on their hands."
— Book Riot

"This is an epic science fiction story as only Jeff [Lemire] could tell."
— Outright Geekery

"Sentient is the kind of taut, sci-fi thriller that won't let you set it down."
— Comicbook.com

"5/5. Jeff Lemire and Gabriel are a match made in heaven."
— Comics Beat