To Crack the World Open: Solitude, Alaska, and a Dog Named Woody (Paperback) 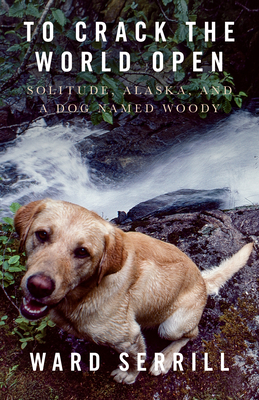 To Crack the World Open: Solitude, Alaska, and a Dog Named Woody (Paperback)

From a remote cabin in the rugged rainforest of the Alaskan wilderness, where the untamed landscape tumbles into the ocean, a remarkable yellow Labrador retriever named Woody helped an exile from corporate America seek a fierce freedom.

A young Ward Serrill arrived in Southeast Alaska in 1982, dispatched by his Seattle accounting firm to a remote native village to audit their new corporation. Within a year Serrill had ditched the job, with designs on forging another life up north, a new Labrador retriever puppy in tow. Woody--named after Guthrie--was of champion bloodline and seemed ready for any adventure.

After a stint working with Tlingit elders in the village of Saxman, Serrill was adopted into the clan. Some called him Dleit Y il, or White Raven. But over time, his connection to the village began to fray as his relationships there unearthed dark aspects of his own family history. Only his friendship with Woody remained unshakable, and it was time to move on.

On the maiden voyage of their dogyak--a specially fitted kayak--Woody and Serrill rounded a point into a half-moon bay with rugged coastline. There, sixteen miles from town on the rough, steep bank, accessible only by boat, sat a small gray house on stilts. In the shadow of ancient spruce and cedars, with a waterfall on one side and the ocean below, he and Woody took up their years-long vigil in the place he came to call Shakri-La.

His experiment in self-isolation helped Serrill to confront the reality and the emotional cost of running away--physically and emotionally--all his life. Looking inward and facing his darkness, Serrill discovered an unexplored region of his heart that offered the true possibility of healing and belonging, made possible by the steadfast devotion of a very special dog.

An extraordinary journey of the heart and soul from the award-winning filmmaker and director of The Heart of the Game, To Crack the World Open is a poignant, adventure-driven Alaskan story of self-discovery, with one of life's most essential relationships--a man and his dog--at its heart.