Still Burning: Half a Century of Chicago, from the Streets to the Corridors of Power: A Memoir (Paperback) 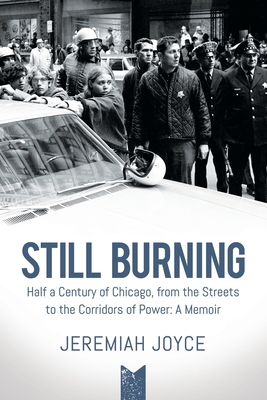 Still Burning: Half a Century of Chicago, from the Streets to the Corridors of Power: A Memoir (Paperback)

In this lively and insightful memoir, Jeremiah Joyce recounts a wide-ranging career that in many way tracks the history of Chicago over the last half century. During the late sixties and early seventies, his jobs took him from tense urban classrooms to street encounters as a member of the Chicago Police Department's Gang Intelligence Unit. While many neighborhoods in American cities turned from white to Black almost overnight, Joyce, as alderman for the 19th Ward on the Southwest Side, fought to ensure the long-term viability and successful harmony of an integrated neighborhood-one that still stands strong and united today. He spent more than a decade as a Democratic state senator in Springfield and participated in some of the turbulent local elections of the eighties. Because of his experience in Chicago politics, presidential campaigns drew on his expertise. Barack Obama consulted with him before running (unsuccessfully) for Congress and again while weighing whether to run for president. An underlying theme throughout Joyce's story is the effort to preserve and improve the vitality of Chicago during a time of racial tumult and white exodus to the suburbs. Overall, his memoir provides an acute, detailed account of the intersection of power, politics, religion and race as it influenced the course of the city.