A Terrible, Horrible, No Good Year: Hundreds of Stories on the Pandemic (Six-Word Memoirs) (Paperback) 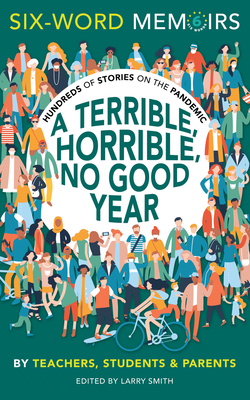 A Terrible, Horrible, No Good Year: Hundreds of Stories on the Pandemic (Six-Word Memoirs) (Paperback)

"The brilliance is in the brevity.” —Vanity Fair

The tenth book in the bestselling Six-Word Memoir series tells the story of a world we never expected to be in and can’t stop talking about.

Told through the lens of students, teachers, and parents, A Terrible, Horrible, No Good Year offers hundreds of inspirational, playful, and profound takes on life during the pandemic.

This book is a time capsule of a shared experience and certain to prompt friends, family, and neighbors to ask: “How would you describe the pandemic in six words.”

Larry Smith is the founder of The Six-Word Memoir® Project, a bestselling series of books, live event programs, and a global phenomenon found in classrooms, conferences, and corporate settings alike. He’s a frequent speaker on the power of personal storytelling, and has engaged teams at Twitter, Levi’s, JPMorgan Chase, Snapchat, Dell, Shutterfly, and ESPN, as well as at foundations, philanthropies, and schools around the world. Larry produced and directed A Map of Myself, the true story of young Syrian-American girl’s journey from Syria to America that started with her Six-Word Memoir.
“These memoir-haikus caught fire when Larry Smith tweeted out the question, 'Can you describe your life in six words?' And — boom — a literary phenomenon was born. Six- Word Memoirs has become a book series, a board game, and during the time of Covid a way for students, teachers, and parents express their experiences.”  — NPR’s “Here & Now”

“I’ve found that some of the most memorable six-word stories arise in the extremes — during our toughest and most joyous moments. So over the past several months, I’ve asked adults and children around the country to use the form to make sense of this moment in history: one person, one story, and six words at a time.”  — Larry Smith, writing in an Op-Ed in The New York Times

“How would you describe your pandemic experience in six words? Have you ever written a Six-Word Memoir? This is an invitation to create a special one about the last 19 months.”  — The New York Times Learning Network, which received 650 responses

“The choice to direct this collection at educators, students, and parents trapped in the nightmare of too much togetherness plus too little social contact was inevitable and also genius. I was very touched by the essays written by teachers and other education professionals.”  —The Expendable Mudge