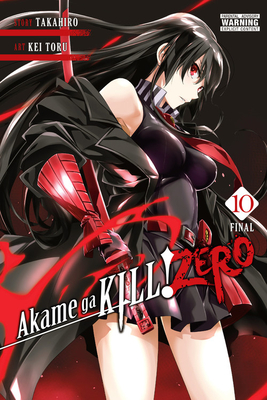 By Takahiro, Kei Toru (By (artist))

This is book number 10 in the Akame ga KILL! ZERO series.

Akame's growing doubts have finally convinced her she can no longer stand and fight beside the Empire. Though she hopes her friends in the assassin unit can be persuaded to join her, the brainwashing of the Empiire is ironclad: "If you're not with us, you're dead." Choosing the side of the people means severing ties to those she cares for with bloody finality! Akame's path leads her at last to revolution-and Night Raid-in the final volume of Akame ga KILL! Zero!
Takahiro is the writer behind the popular Akame ga KILL! and its prequel series Akame ga KILL! Zero.

Kei Toru is the artist of the manga adaptation of Rokka: Braves of the Six Flowers and Akame ga KILL! Zero, the prequel to the New York Times bestselling series Akame ga KILL!